“The bullet can self-correct its navigational path 30 times a second, all while flying more than twice the speed of sound.” 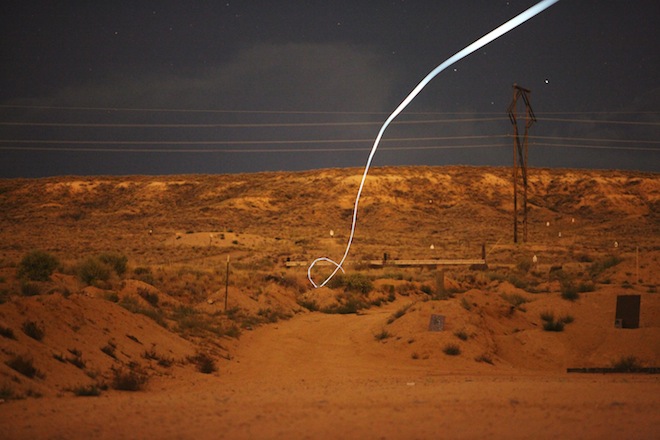 The U.S. military has been after self-guided bullets for years. Now, government researchers have finally made it happen: a bullet that can navigate itself a full mile before successfully nailing its target.

The breakthrough comes courtesy of engineers at the government’s Sandia National Laboratories. They’ve successfully tested a prototype of the bullet at distances up to 2,000 meters — more than a mile. The photo above is an actual image taken during one of those tests. A light-emitting diode was attached to the bullet, showing the amazing pathway that the munition made through the night sky.

The lab’s day-to-day operations are run by an auxiliary of Lockheed Martin. Of course, Lockheed’s been a longtime partner in the military’s quest for the ultimate self-guided munition. In 2008, they scored a $14.5 million contract as part of Darpa’s “Exacto” program, which sought to develop sniper rifles with guided bullets. They’ve also been involved in the agency’s “One Shot” initiative, which is trying to develop scope-mounted lasers that can help snipers compensate for weather conditions.

Each self-guided bullet is around 4 inches in length. At the tip is an optical sensor, that can detect a laser beam being shone on a far-off target. Actuators inside the bullet get intel from the bullet’s sensor, and then “steer tiny fins that guide the bullet to the target.” The bullet can self-correct its navigational path 30 times a second, all while flying more than twice the speed of sound.