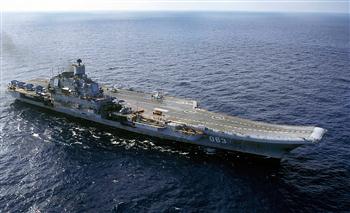 DAMASCUS – Agence France-Presse — A large Russian naval flotilla led by an aircraft carrier has docked in the Syrian port of Tartus in what Damascus state media hailed on Sunday as a show of solidarity by close ally Moscow.

The six-day port call by the carrier group in the Mediterranean port where Russia has a recently expanded naval base is intended to boost ties at a time when President Bashar al-Assad’s government is under mounting Western and Arab pressure over its bloody crackdown on dissent, the Syrian press said.

“The port call is aimed at bringing the two countries closer together and strengthening their ties of friendship,” the official SANA news agency quoted a Russian naval officer it named as Yakushin Vladimir Anatolievich as saying.

“The commanders of the Russian naval vessels docked in Tartus took turns to express their solidarity with the Syrian people,” the news agency added.

The governor of Tartus province, Atef al-Nadaf, paid tribute to the “honourable position adopted by Russia which has stood by the Syrian people.” The Al-Watan newspaper, which is privately owned but close to the government, reported last week that the carrier Admiral Kuznetsov was escorted by a large flotilla including submarines.

Despite strong Western criticism, Russia has stood by its Cold War ally in the face of a mounting international outcry over the death toll from security force efforts to crush nearly 10 months of anti-government protests.

In October, Moscow joined Beijing in vetoing a Western-drafted UN Security Council resolution that would have threatened Damascus with “targeted measures” if it failed to rein in its security forces.