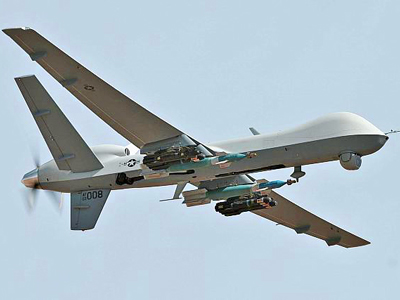 – ﻿﻿US Civilians Are Now Helping Decide Who To Kill With Military Drones (Business Insider, Dec. 30, 2011):

President Obama’s enormous expansion of the U.S. drone program may be pushing too fast for military staffing to keep up.

David S. Cloud of The Los Angeles Times reports the military is now forced to rely on a string of civilian contractors placed at all levels along the “kill chain.” These are the people who analyze incoming drone video and decide when to fire Hellfire missiles.

The practice is not new.

According to Cloud, an American civilian played a “central” role in the Predator attack that accidentally killed 15 Afghans in 2010, information that “surprised” the investigating Army officer.

Manning the drone fleet is a mounting issue in the Air Force.

It takes more staff to fly a drone than an F-15, and with more drones than ever in the air, non-government employees are increasingly employed to analyze video, and keep the UAVs in the air.

The Air Force says it takes 168 people to fly a Predator for 24 hours, and 300 people to keep a Global Hawk aloft for the same time.

The Air Force owns 230 Reapers, Predators, and Global Hawks — flying 50 of them at any given time.

But it’s the 730 more drones being added to the fleet over the next 10 years that may explain why military personnel are now being asked to fly four drones at once.

Announced last week and received with a wealth of concerns, the four drone per pilot program raises further concerns about an already legally muddled program.

Despite public resistance, legal questions, and additional pilot stress, military officials in the U.S. and Britain are already claiming to see “great promise” with the four drone program.

Unless the military drastically increases its recruiting efforts, with the defense cuts a huge improbability, there is likely to be an increasing number of civilians, working for profitable corporations, helping make decisions on when to fire U.S. weapons.

While the Air Force tries to maintain certain standards within its ranks, attempting to root out those with questionable legal backgrounds, and poor “moral standing,” every corporation within the kill chain is guided by its own hiring practices.