– Who Gave Permission To A Bankrupt MF Global To Sell Italian Bonds To JP Morgan At A 5% Discount To Market Value? 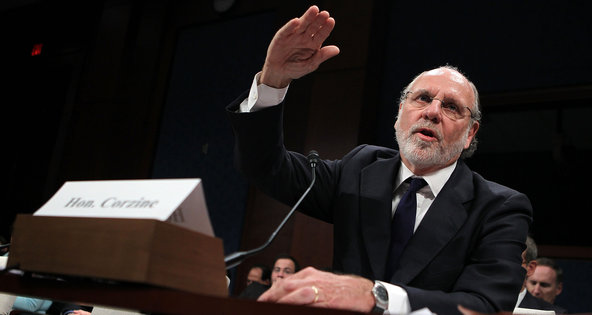 Federal authorities investigating the collapse of MF Global have uncovered e-mails that detail the transfers of money in the firm’s last days, including transfers that contained customer money, according to people close to the investigation.

One e-mail chain refers to the transfer of roughly $200 million that MF Global owed JPMorgan Chase on Oct. 28 — the firm’s last business day before it filed for bankruptcy. In that chain, a senior official in the firm’s Chicago office was told to make the transfer, said the people close to the investigation who requested anonymity because the inquiry was still open.

That official, Edith O’Brien, a treasurer at MF Global, is considered a “person of interest” in the investigation, said two of the people, who added that authorities expected to interview her in the coming days. It was not clear who had directed Ms. O’Brien, whose job was to oversee the customer money, to make the Oct. 28 transfer. The roughly $200 million that JPMorgan Chase received is said to be entirely customer money.

Ms. O’Brien has hired a prominent criminal defense lawyer, Reid H. Weingarten of Steptoe & Johnson, according to one of the people. Ms. O’Brien has not been accused of any wrongdoing. And there is no indication that she had reason to suspect that the money being transferred included customer money.

MF Global’s sloppy recordkeeping and a flurry of transactions in its final days may have obscured the fact that the firm was dipping into the cash of farmers, traders and hedge funds to cover its own needs.

Still, the interest in Ms. O’Brien and the e-mails suggest that, nearly two months after some $1 billion in customer money went missing, investigators have identified employees who may have played an important and perhaps unwitting role in the improper use of customer money.

Ms. O’Brien could not be reached for comment. Mr. Weingarten did not respond to several requests for comment. A spokesman for the Commodity Futures Trading Commission, which is leading the investigation, declined to comment.

The transfer to JPMorgan was not the only questionable one. Investigators suspect that later on Oct. 28, MF Global continued using customer money to settle payments with trading partners and others, leading to the roughly $1 billion hole in customer cash.

Regulators have spent nearly two months hunting for the missing money. Angry customers, who have yet to receive roughly a third of their money, have taken their grievances to Washington. Jon S. Corzine, the company’s former chief executive, has testified on Capitol Hill three times this month about the firm’s collapse.

Mr. Corzine, a former United States senator and New Jersey governor, testified that on the morning of Oct. 28, JPMorgan told him that one of the firm’s accounts at the bank in London was overdrawn. He said he passed the notice along to his staff.

“At that time, I was trying to sell billions of dollars of securities to JPMorgan Chase in order to reduce our balance sheet and generate liquidity,” Mr. Corzine told lawmakers. “JPMorgan Chase told me that they would not engage in those transactions until overdrafts in London were cleaned up.”

After the transfer, JPMorgan, one of MF Global’s main banks, questioned Mr. Corzine about the source of the money.

“Since I had no personal knowledge of the issue, I asked senior people in the back office and the legal department to become directly involved in responding to JPMorgan Chase’s request,” he told the House Financial Services Subcommittee on Oversight and Investigations.

“I had explicit statements that we were using proper funds, both orally and in writing, to the best of my knowledge,” he told the panel. “The woman that I spoke to was a Ms. Edith O’Brien.”

But JPMorgan was not satisfied. The bank once again contacted Mr. Corzine, this time requesting a guarantee in writing. Mr. Corzine handed the request to his general counsel, Laurie Ferber. Ms. Ferber would not authorize the document, according to one of the people close to the investigation, saying the firm did not offer such special assurances.

Two days later, at about 6 p.m. on Sunday, Oct. 30, Ms. Ferber notified regulators that there was an apparent shortfall in customer money. She blamed an accounting error, according to the CME Group, the firm’s primary regulator and an exchange where it conducted business.

At about 1 a.m., Ms. O’Brien and another executive in Chicago told the exchange that the shortfall in the customer accounts was real, according to the CME.

Ms. O’Brien is considered an expert of sorts on the protection of customer money at futures firms.

In the last year and a half, Ms. O’Brien has made several appearances before the Commodity Futures Trading Commission. On at least two occasions, she was a panelist at roundtable discussions held at the agency on the topic of safeguarding customer money, and also attended at least three meetings with agency officials, including one titled “Practicalities of Individual Customer Protection.”

Since MF Global’s collapse, Ms. O’Brien has been working for the trustee overseeing the liquidation of the firm’s brokerage unit, helping lawyers and accountants understand the firm’s operations.