‘Only 47 percent of the U.S. workforce is “fully employed” at this point.’

If you still have a good job, you certainly have something to celebrate on Labor Day 2011.  So far you have survived the decline of the U.S. economy.  But your day may be coming soon.  This weekend, there will be millions of Americans that will not be doing any celebrating.  They are not enjoying a break from their jobs because they don’t have any jobs.  In fact, it seems kind of heartless for the rest of us to be celebrating while so many of our countrymen are destitute.  What are we celebrating on Labor Day 2011?  The lack of jobs in America?  At this point, the U.S. economy closely resembles a gigantic game of musical chairs.  Every time the music stops, even more good jobs are pulled out of the game and even more workers are added.  Once upon a time, if you really wanted a job in America you could get one.  But now the competition for even the most basic jobs is absolutely brutal.  If you gathered together all of the unemployed people in the United States, they would constitute the 68th largest country in the world.  It would be a nation larger than Greece.  All of those unemployed people are not going to be taking trips with their families this holiday weekend.  Instead, most of them are going to be trying to figure out what to do with their shattered lives.

With the economy in such a mess, you would think that someone out there would be suggesting that Labor Day 2011 should really be a day of mourning.  This economic downturn has shredded the lives of millions of American families.

Is there any other crisis in recent years that has had more of an impact on a national level?

On Friday, the U.S. Bureau of Labor Statistics reported that no new jobs were created during the month of August and that the official unemployment rate remained steady at 9.1 percent.

Wait, aren’t we supposed to be in the middle of an economic recovery?

Actually, we need at least 125,000 new jobs or so each month just to keep up with the growth of the U.S. population.  So it seems odd that the economy would add zero jobs but the unemployment rate would not increase.

But that is what the government is saying.

In any event, things don’t look good.  According to the U.S. Bureau of Labor Statistics, the civilian employment-population ratio was at 58.2 percent last month.  This is an incredibly low figure.

In a recent article, John Mauldin explained what would have to happen to return the employment-population ratio to where it was in the year 2000….

The US has roughly the same number of jobs today as it had in 2000, but the population is well over 30,000,000 larger. To get to a civilian employment-to-population ratio equal to that in 2000, we would have to gain some 18 MILLION jobs.

Does anyone have an extra 18 million jobs laying around somewhere?  The following is a chart showing what has happened to the employment-population ratio over the last several decades…. 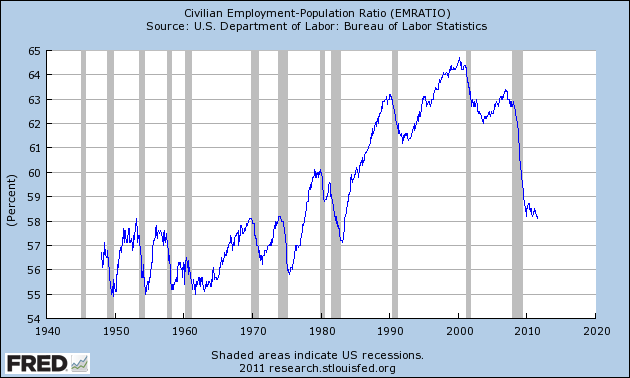 What makes this chart even more startling is that the number of women in the workforce was constantly rising for most of the time period reflected in this chart.  So when you take that into account our current situation is far worse.

For example, back in 1969 95 percent of all men between the ages of 25 and 54 had a job.  Pretty much any man in his prime working years that wanted a job could get a job.

But that is only part of the story.  Another significant trend has been how flat wages have been.  Average hourly earnings fell 0.1% in August.  Meanwhile, the prices in the stores continue to go up.

In this column, I write a lot about how the middle class is being destroyed in this country.  When you look at the ratio of employee compensation to GDP, it is now the lowest that is has been in about 50 years.  In other words, U.S. workers are taking home a smaller share of the pie than at any other time in modern U.S. history.

But at this point those that still actually do have jobs consider themselves to be the lucky ones.

Tonight, there will be millions of desperate unemployed Americans that will blankly stare at their televisions as they try to figure out how their dreams got flushed down the toilet.

What would you do if you lost your job and you were unemployed for half a year?

Would you be able to survive?

In America today, the longer that you are unemployed, the harder it is for you to get another job.  If you have been unemployed for at least one year, there is a 91 percent chance that you will not find a new job within the next month.

Out of sheer desperation, many Americans have taken jobs that they never even dreamed that they would take.

Only 47 percent of the U.S. workforce is “fully employed” at this point. Right now there are hordes of Americans that are waiting tables, flipping burgers or stocking shelves at Wal-Mart because that is all that they can find right now.

Sadly, this is all part of a long-term trend.

This middle class is being pummeled out of existence, and most Americans don’t even understand what is happening.

It certainly does not help that both the Republicans and the Democrats have stood by as millions upon millions of our jobs have been shipped out of the country.

It also certainly does not help that both the Republicans and the Democrats have stood by as millions upon millions of illegal immigrants have taken jobs away from American citizens.

It also certainly does not help that both the Republicans and the Democrats have stood by as U.S. businesses have been absolutely crushed by mountains of nightmarish regulations and have been taxed into oblivion.

The decade that just ended was the worst decade for job growth in America since the Great Depression.  In fact, even though thirty million people were added to the U.S. population during the decade, there was essentially zero job growth.

Sadly, things look like they are going to continue to get even worse.  For example, the United States Postal Service is in such trouble that it is asking Congress to allow it to lay off 120,000 workers. Overall, the Postal Service wants to eliminate 220,000 positions by 2015.

So is this big speech that Obama is going to give on Thursday going to solve anything?

The reality is that if Obama or any of his advisors had any grand ideas for fixing our situation they would have implemented them by now.

And what is the big deal in making us wait until Thursday to hear these “new ideas”?  Why not just tell us now?

Sadly, the truth is that everything that our politicians do now is about setting themselves up for the 2012 election.

Most likely, Obama is just going to take a bunch of tired ideas that do not work and “spin” them into a grand new plan.

Millions of Americans will actually buy into it.

But it is not as if establishment Republican candidates have anything to offer either.

You know, if Obama wanted to do something substantial, one place to start would be to order the Federal Reserve to stop paying banks not to make loans to individual and small businesses.

But just like all of our other weak-minded recent presidents, Barack Obama is not going to confront the Federal Reserve.

In fact, everything that Obama actually does “for the economy” only seems to make things worse.

As I have outlined before, we know exactly why our economy is losing jobs and we know things that we could start doing right now to reverse the long-term trends that are absolutely killing us.

But Barack Obama is not talking about real solutions and neither are the establishment Republican candidates.

So, no, there are not too many reasons to celebrate on Labor Day 2011.  Our economy is dying and millions upon millions of our fellow citizens are deeply suffering.

Urgent action is required in order to prevent our situation from rapidly getting worse, but right now the vast majority of our politicians are asleep at the switch.

So instead of celebrating this Labor Day, why don’t you say a prayer for America instead?

We really could use it.