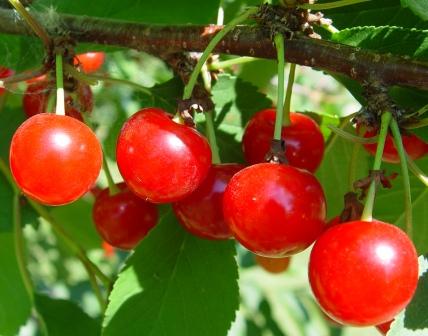 Oregon`s Hood to Coast relay is a 197 mile race involving 1,000 relay teams. In 2009, scientists from Oregon`s Health and Science University studied the impact of tart cherry juice on pain in athletes participating in the race. Participants drank 10.5 ounces of tart cherry juice twice daily for a week prior to the race and then every 8 hours during the race. At the end of the race the cherry drinkers had less pain and faster muscle recovery. NSAIDs, though helpful for some kinds of pain, are associated with side effects including hospitalization and death. Tart cherry juice, on the other hand, has few if any side effects and may be a healthier choice for athletes and others who suffer from pain.

Gout is a painful type of arthritis caused by build up of uric acid in joints, often favoring the toes. In a 2003 study designed to test the value of cherries for ameliorating gout pain 10 healthy female volunteers ate 45 Bing cherries for breakfast. Researchers at the USDA`s Agricultural Research Service then evaluated levels of urate, a precursor of uric acid, in blood plasma levels and in urine. Within 5 hours of eating cherries, urate decreased in blood plasma levels and increased in urine. Scientists also evaluated levels of C-reactive protein and nitric oxide, two other markers of inflammation, which decreased after subjects ate cherries.

In a recent study at the Oregon Health and Science Center, women with fibromyalgia were evaluated for muscle pain and weakness after exercise. Of the 14 women, half drank cherry juice and half a placebo for ten days. Results showed a subset of the cherry group enjoyed a significant reduction in overall pain.

The research suggests that cherries can be effective for different kinds of pain conditions. While both tart and sweet cherries have anthocyanins, tart cherries have more of them as well as a lower glycemic index making them a better choice. Tart cherries are also one of the only known food sources of melatonin, helpful for those whose pain interrupts their sleep cycle.

Tart cherries are available dried, frozen, and in juice form.

[Editor`s Note: NaturalNews is strongly against the use of all forms of animal testing. We fully support implementation of humane medical experimentation that promotes the health and wellbeing of all living creatures.]