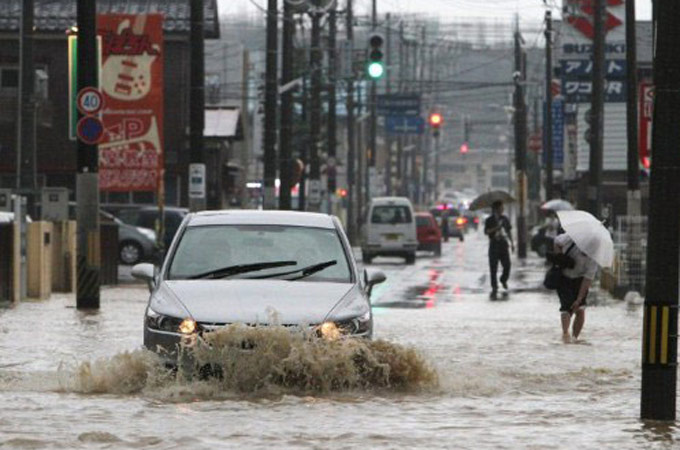 More than 400,000 people were urged to leave their homes amid flooding in Niigata and Fukushima prefectures [AFP]

One dead and five missing as heavy rains burst rivers and dykes in Niigata and tsunami-hit Fukushima prefectures.

Heavy rains have claimed their first victim in Japan, where the government has urged nearly half a million people to leave their homes amid flooding in the northern Niigata and tsunami-hit Fukushima prefectures.

River banks gave way to swollen rivers at several points on Saturday and more than 400,000 people were advised to head to evacuation centres.

As Al Jazeera’s Aela Callan reported from Yasuda city in Niigata prefecture, the worst-hit towns were swamped by water levels that reached as high as 12 metres. But she said the rain had stopped by midday and authorities predicted that the worst of the rains had ceased.

The flooding comes nearly five months after a massive earthquake and tsunami hit Japan’s northeastern coast, killing more than 13,000 people and displacing tens of thousands from their homes.

“The Self-Defence Forces are now responding to a different disaster,” our correspondent said. “It is reminiscent of the earthquake and tsunami and people are heading to evacuation centres and staying out of the way of aid and rescue efforts.”

“It is another blow to people who are still trying to recover,” she added.

The government has urged citizens to be on the maximum alert against more flooding and mudslides as television footage showed muddy swollen rivers, broken dykes and flooded houses.

Bridges over the Shinano River in Niigata disappeared into muddy water in the middle, while trees and telephone polls were seen fallen. Dozens of cars were seen stranded on a road along the Shinano.

Local governments in Niigata and Fukushima prefectures have advised a total of 417,000 people to evacuate, according to public broadcaster NHK.

“We found a car fallen in River Nakazawa last night… and found the driver’s body downstream this morning,” the AFP news agency cited an official at Niigata police as saying of the drowned man.

Five other people are missing in the area, including a 93-year-old woman who was swept away in a river and a 25-year-old man who was believed to have fallen into a swollen river, police said.

Officials had requested the country’s Self-Defence Force dispatch troops to join the search for missing people and help those stranded by mudslides and floods.

One man was listed as missing in Fukushima, whose Pacific coasts were hit by a massive tsunami on March 11 that crippled an atomic power plant in the world’s worst nuclear disaster since Chernobyl in 1986.

More than 40 people who had spent a night in cars and buses after being stranded on a road blocked by mudslides and flooding in Fukushima were rescued unhurt.

“I couldn’t sleep. I had some food but couldn’t swallow a bite” out of fears that fresh further mudslides would hit the stranded cars, a woman told NHK.

The weather agency has warned quake-hit regions are more prone to mudslides as the tremors had worsened ground conditions.

1 thought on “Flooding in Niigata and Fukushima Prefectures: More than 400,000 people urged to leave their homes – One dead and five missing”