And here is what these criminals are hiding: 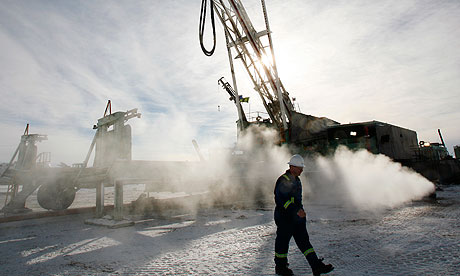 Gas drilling near Calgary. The first exploratory drilling for shale gas in the UK is about to begin near Blackpool. Photograph: Todd Korol/Reuters

The results of the first attempt to extract shale gas in the UK using a controversial technique known as hydraulic fracturing, or “fracking”, will be kept secret for four years, the Guardian has learned.

Cuadrilla Resources, a US private equity backed firm, told MPs at the energy and climate change committee that it will begin this month to pump 1,200 cubic metres of highly pressurised water mixed with chemicals and sand nearly 3,000 metres underground into an onshore shale gas reservoir near Blackpool.

The process is known as “fracking” because it fractures rock to release gas. Industry estimates reckon that more than a tenth of the country’s gas needs could be produced in this way by 2015. However, critics such as the Green party say that it is environmentally unsafe because the chemicals could contaminate aquifers used for drinking water and farming.

Cuadrilla is under intense public scrutiny as the UK’s first prospective shale gas producer. But under the terms of its licence, awarded in 2007, it does not have to declare how much gas it thinks it can produce from the sites until 2015. If the firm was publicly quoted, stock market rules would require it to disclose the information to the market as it would be share price sensitive.

A government spokesman confirmed: “They get four years to look around – that [four-year period] is protecting their commercial opportunity.” He added that it was normal practice for oil and gas exploration companies to keep such commercial information confidential for a period.

But the delay gives the company more time to study the geology along the Lancashire coast and potentially bid for more licences in the area ahead of rivals. The government is preparing to launch its 14th onshore licensing round – the first since 2007 when Cuadrilla won its licence – in the next few weeks. There is expected to be strong interest particularly from companies looking to add new acreage to produce unconventional gas from shale or coal-bed methane.

Cuadrilla began exploratory drilling at the first of several test wells at Preese Hall Farm, Weeton, just inland from Blackpool, in August. When the fracking begins this month, 1,200 cubic metres of water mixed with chemicals – equivalent to about two and a half Olympic-sized swimming pools – will be pumped horizontally along the reservoir to fracture open the rock.

Mark Miller, Cuadrilla chief executive, told MPs at the select committee hearing into shale gas that 99.8% of this is pure water bought from local supplier United Utilities. The rest is made up of two chemicals: a fluid to reduce friction inside the pipe and an unspecified additive. Far greater quantities of water would be needed if full-scale production began. According to the Tyndall Centre, a climate change research body, about 2,500-3,000 horizontal wells spread over some 140-400 square kilometres would need to be drilled using some 27 to 113m tonnes of water in order to sustain production levels equivalent to 10% of UK gas consumption.

Fracking typically only lasts for 60 days although the reservoir produces for years afterwards. Miller confirmed that only about a third of the water mix is recovered during the initial period, with at least half remaining underground. At the Preese Hall Farm site, an aquifer lies 200-400 metres below the surface. Miller said solid rock between it and where the fracking takes place would prevent the water mix contaminating the aquifer.

The collected water, rock chips and drilling mud would need to be sent to landfill. He said that based on geological seismic surveys, the company could predict what happens to the fractured gas and waste water mix but admitted: “You never have control. Fractures will always go into the path of least resistance.”

Cuadrilla is belatedly ramping up its public relations efforts. At 5pm yesterday, the company had finally put its proper website live for the first time. The holding page it replaced – which listed a community helpline for worried locals – did not appear in the first few pages of search results on Google.

The company has made its operations in the North Sea available for visits from energy experts and politicians and done some media interviews. But the chairman of Blackpool Green party, Philip Mitchell, said the company had not directly engaged with the local community or held any public meetings to explain its activities. He also criticised the licensing and planning approval regulations, which predate the use of high-volume hydraulic fracturing and do not place special requirements on unconventional producers such as Cuadrilla.