US spy agency forms taskforce to assess fallout from 250,000 leaked US cables 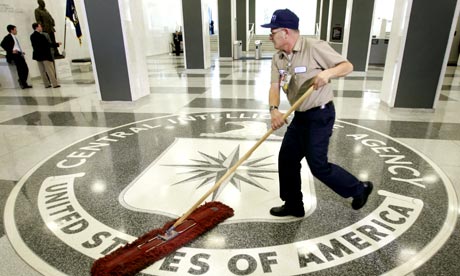 The CIA has formed a WTF unit to deal with any fallout from the WikiLeaks disclosures. Photograph: Jason Reed/Reuters/Corbis

The CIA has launched a taskforce to assess the impact of 250,000 leaked US diplomatic cables. Its name? WikiLeaks Task Force, or WTF for short.

The group will scour the released documents to survey damage caused by the disclosures. One of the most embarrassing revelations was that the US state department had drawn up a list of information it would like on key UN figures – it later emerged the CIA had asked for the information.

“Officially, the panel is called the WikiLeaks Task Force. But at CIA headquarters, it’s mainly known by its all-too-apt acronym: WTF,” the Washington Post reported.

WTF is more commonly associated with the Facebook and Twitter profiles of teenagers than secret agency committees. Given that its expanded version is usually an expression of extreme disbelief, perhaps the term is apt for the CIA’s investigation.

Earlier this month the Guardian revealed that the CIA was responsible for drafting the data “wishlist” that the US state department wanted on UN secretary general, Ban Ki-moon, and other senior members of the organisation. The Washington Post said the panel was being led by the CIA’s counterintelligence centre, although it has drawn in two dozen members from departments across the agency.

Although the CIA has featured in some WikiLeaks disclosures, relatively little of its own information has entered the ether, the paper reported. A recently retired former high-ranking CIA official told the Post this was because the agency “has not capitulated to this business of making everything available to outsiders.

“They don’t even make everything available to insiders. And by and large the system has worked,” he said.

While most of the agency’s correspondence is understood to be classified at the same “secret” level as the leaked cables that ended up online, it is understood the CIA uses systems different from those of other government agencies.

Acronyms. Pithy and useful when you get them right, embarrassing and memorable when you fail to spot the pun.

Long before the internet revived the TLA (three-letter acronym), there was MAD, one of the more appropriate constructions, which stood for mutually assured destruction, the doctrine under which everyone dies if nuclear devices were deployed.

Change one letter, and you get BAD, or British Association of Dermatologists – as in: “I’d love a BAD practitioner to look at my skin.”

Unfortunately the spoilsports at BAD usually put “the” before the acronym on the association’s website, although there are a couple of slips: “To find out how to write BAD clinical guidelines, please click here,” being one of them.

Many other good examples are given on the Unfortunate Acronyms website, also known as ASS – Acronyms Sometimes Suck.

Another in the field of medicine is DOH, the website of the Washington state department of health (www.doh.wa.gov). Hardly encouraging for those planning a visit, given its connotations with the general incompetence personified by Homer in the Simpsons.

The Boston Redevelopment Authority doesn’t shy away from using its abbreviated form.

Almost unbelievably, there is a Breakthrough Urban Ministries operating two homeless shelters in Chicago. Unsurprisingly, the organisation does not use its acronym when promoting its services, preferring to shorten the name to Breakthrough.

The Phoenix Islands Settlement Scheme is often described as one of the last attempts at colonisation by the British empire.

The plan was to reduce overpopulation on the Gilbert islands in the South Pacific by moving numbers of people to the neighbouring Phoenix islands.

The outbreak of the second world war hampered the move, and only one of the eight islands is now believed to be inhabited – and the islands are threatened by rising sea levels.