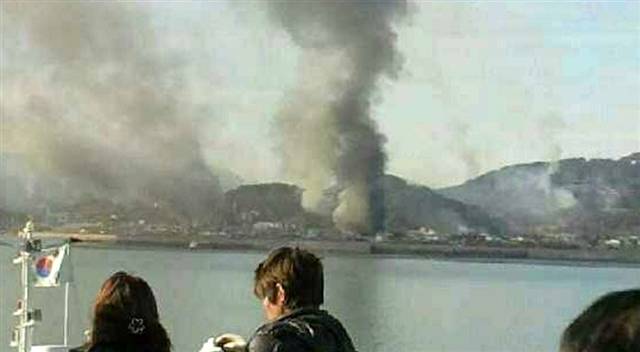 YTN television said up to 70 houses were on fire on Yeonpyeong, about 75 miles west of the capital Seoul.

SEOUL — Fires were burning out of control Tuesday after a South Korean island was hit by dozens of artillery shells fired by North Korea.

YTN said at least 200 North Korean shells hit Yeonpyeong island. Most of the shells landed on a South Korean military base there.

The clash came amid South Korean military drills in the area. North Korea’s military had sent a message to South Korea’s armed forces early Tuesday to demand that the drills stop, but the South continued them, according to an official at South Korea’s Joint Chiefs of Staff.

During the drills, South Korean marines on the island shot artillery toward southern waters, away from North Korea, the official said. He spoke on condition of anonymity because of military rules.

The skirmish also follows high tension over North Korea’s claim that it has a new uranium enrichment facility and just over a month after North Korean leader Kim Jong Il unveiled his youngest son Kim Jong Un as his heir apparent.

YTN television said up to 70 houses were on fire on Yeonpyeong, about 75 miles west of the capital Seoul. The station broadcast pictures of thick columns of black smoke rising from the island. Screams and chaotic shouts could be heard on the video. YTN said between 1,200 and 1,300 people live on the island.

Island residents were escaping to about 20 shelters in the island and sporadic shelling was continuing, officials said.

“Houses and mountains are on fire and people are evacuating. You can’t see very well because of plumes of smoke,” a witness on the island told YTN. “People are frightened to death.”

Yeonpyeong, which houses military installations and a small civilian population, is located in an area that has been the focus of two previous deadly battles between the Koreas.

The two Koreas are still technically at war — the Korean War ended only with a truce — and tension rose sharply early this year after Seoul accused the North of torpedoing one of its navy vessels, killing 46 sailors.

The White House said it “strongly condemns the attack” and called on Pyongyang to “halt its belligerent action.”

In a statement, White House press secretary Robert Gibbs said the U.S. “is firmly committed to the defense of our ally, the Republic of Korea, and to the maintenance of regional peace and stability.”

U.S. military officials told NBC News that American forces were not involved in the clash. However, the Pentagon was monitoring the situation closely.

The U.S. military has about 29,000 personnel stationed in South Korea, NBC News reported.

President Lee Myung Bak ordered officials to “sternly respond” to North Korea’s action but also called on officials to make sure that the “situation would not escalate,” according to a presidential official. He asked not to be identified, citing the issue’s sensitivity.

A South Korean Joint Chiefs of Staff official said dozens of rounds of artillery landed on the island and in the sea. The official, who spoke on condition of anonymity because of JCS rules, said South Korea’s military was on alert.

China expressed concern over the skirmish.

Hong Lei, a spokesman for the Chinese Foreign Ministry, told a news conference that both sides of the divided Korean peninsula should “do more to contribute to peace” and said it was “imperative now to resume the six-party talks” aimed at ending North Korea’s nuclear weapons program.

China is North Korea’s only major ally, and its economic and diplomatic support have been important to shoring up its otherwise isolated neighbor. Kim Jong Il visited China twice this year to strengthen ties.

A senior Russian Foreign Ministry official called on both sides to show restraint to prevent a wider conflict.

“We think the use of force on the Korean peninsula, and in international relations in general, is a path that is absolutely unacceptable,” the official told reporters on condition his name was not published.

Zhu Feng, a professor of international relations at Peking University, described the incident as “unbelievable”.

“It’s reckless provocation,” Zhu said. “They want to make a big bang and force the negotiations back into their favor. It’s the oldest trick.”

The countries’ western maritime boundary has long been a flash point between the two Koreas. The North does not recognize the border that was unilaterally drawn by the United Nations at the close of the 1950-53 Korean War.

North and South Korea have fought three bloody skirmishes near the maritime border in recent years, most recently in November 2009.

NBC News’ Jim Miklaszewski, Reuters and The Associated Press contributed to this report.