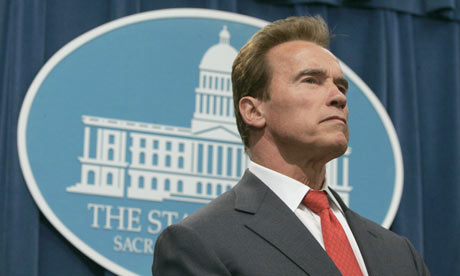 Aug. 24 (Bloomberg) — California will delay paying $2.9 billion of subsidies to schools and counties in September, a month earlier than projected, to save cash amid an impasse that has left the state without a budget for 54 days.

The state’s top financial officials — the controller, treasurer and finance director — told lawmakers today that the 90-day deferrals need to start next month instead of October to make sure there’s enough money to pay bondholders. The amount is in addition to $3.2 billion the state pushed back in July.

California began its fiscal year on July 1 without a spending plan after Republican Governor Arnold Schwarzenegger and Democrats who lead the Legislature remained deadlocked over how to fill a $19 billion deficit. Controller John Chiang has warned he may need to issue IOUs within two weeks to pay for everything from supplies to contracted services and health-care costs if the impasse continues into next month.

“This is the salt in the wound,” said Rick Pratt, assistant executive director of the West Sacramento-based California School Boards Association, which represents districts statewide. “It’s the state taking its cash flow problem and making it a school district problem,” he said. He said deferrals from previous years have raised costs while the state has cut aid.

The deferrals will help the state meet four major payments in October that total about $1.74 billion, according to H.D. Palmer, a spokesman for Schwarzenegger’s budget office. He said that includes about $803 million in interest on general- obligation bonds.

“Without an enacted budget in the near term that provides an adequate solution on both a budgetary and cash-flow basis, remaining general-fund resources must be conserved to the greatest-possible extent to meet priority payments, particularly all debt-service obligations,” the state’s top three finance officials said in a letter sent to lawmakers.

Absent a budget, the state can’t sell the short-term notes it typically uses each year to bridge cash shortages, because an approved spending plan must provide for repayment of the debt.

Investors today were demanding about 112 basis points of extra yield on the state’s 10-year bonds above those of AAA rated municipal securities, a three-month low, according to Bloomberg Fair Value Index data. That’s less than the 171 basis- point spread the bonds reached on July 1, 2009, just before the state began issuing IOUs amid a similar budget standoff. A basis point is 0.01 percentage point.

Standard & Poor’s, which gives the state its fourth-lowest investment-grade rating of A-, said June 8 that if the current impasse extends for as long as three or four months, it may lower that score. California had $69 billion of outstanding general-obligation debt as of May 1, S&P said. Another $41.6 billion in tax-backed debt issues has been authorized, according to Treasurer Bill Lockyer’s website.

The payment deferral was announced as lawmakers passed a bill to let recipients use state IOUs to pay fees and taxes owed to the government in Sacramento, if the warrants are issued.

The legislation, from Assemblyman Joel Anderson, a San Diego Republican, passed the Senate unanimously. It requires all state agencies to accept registered warrants issued to pay for goods and services. The Assembly unanimously approved the measure in September.

The bill aims to offset the hardship IOUs can impose on those who receive them, Anderson said, citing the experiences some recipients had with last year’s warrants. The most-likely beneficiaries would be vendors who get IOUs for goods and services rendered and must make periodic payroll-tax payments to the state, said Collin McGlashen, a spokesman for Anderson.

The state, with the world’s eighth-largest economy, issued $2.6 billion of IOUs last year after a similar budget stalemate. That was only the second time since the Great Depression that California had to use warrants to cover costs and conserve cash. Warrants issued last year paid 3.75 percent in interest, a rate set by the state’s Pooled Money Investment Board.

The largest banks operating in California, including Bank of America Corp., based in Charlotte, North Carolina, and JPMorgan Chase & Co. in New York, last year agreed to swap cash for the IOUs for account holders in early July. Some banks stopped accepting them less than two weeks later. That left some recipients with the paper until redemptions began in September.

“It’s about equity,” said Senator Tony Strickland, a Santa Barbara County Republican who is running for Controller against Chiang, a Democrat

Schwarzenegger’s budget office opposes the IOU bill because it may reduce the state’s cash position to less than projected, said Palmer, the spokesman. Draining the state’s coffers would defeat the purpose of the warrants, he said.

Budgets and tax increases in California must be approved by a two-thirds supermajority of the Legislature. While Democrats control both chambers, they are short of a two-thirds majority by two votes in the state Senate and five in the Assembly.

– US Home Sales in July: Record Drop Of 27 Percent, The Largest Monthly Drop On Record