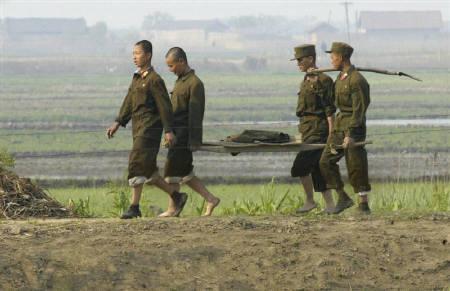 North Korean soldiers walk along the banks of the Yalu River near the North Korean town of Sinuiju, opposite the Chinese border city of Dandong May 27, 2009. REUTERS/Jacky Chen

MOSCOW (Reuters) – Russia is taking security measures as a precaution against the possibility tension over North Korea could escalate into nuclear war, news agencies quoted officials as saying on Wednesday.

Interfax quoted an unnamed security source as saying a stand-off triggered by Pyongyang’s nuclear test on Monday could affect the security of Russia’s far eastern regions, which border North Korea.

“The need has emerged for an appropriate package of precautionary measures,” the source said.

“We are not talking about stepping up military efforts but rather about measures in case a military conflict, perhaps with the use of nuclear weapons, flares up on the Korean Peninsula,” he added. The official did not elaborate further.

North Korea has responded to international condemnation of its nuclear test and a threat of new U.N. sanctions by saying it is no longer bound by an armistice signed with South Korea at the end of the 1950-53 Korean War.

Itar-Tass news agency quoted a Russian Foreign Ministry official as saying the “war of nerves” over North Korea should not be allowed to grow into a military conflict, a reference to Pyongyang’s decision to drop out of the armistice deal.

“We assume that a dangerous brinkmanship, a war of nerves, is under way, but it will not grow into a hot war,” the official told Tass. “Restraint is needed.”

The Foreign Ministry often uses statements sourced to unnamed officials, released through official news agencies, to lay down its position on sensitive issues.

Russia is a veto-wielding permanent member of the U.N. Security Council which is preparing to discuss the latest stand-off over the peninsula.

In the past, Moscow has been reluctant to support Western calls for sanctions. But Russian officials in the United Nations have said that this time the authority of the international body is at stake.

Medvedev told South Korean President Lee Myung-bak, who called him on Wednesday, that Russia was prepared to work with Seoul on a new U.N. Security Council resolution and to revive international talks on the North Korean nuclear issue.

“The heads of state noted that the nuclear test conducted by North Korea on Monday is a direct violation of a U.N. Security Council resolution and impedes international law,” a Kremlin press release said.