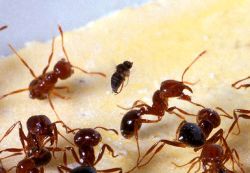 Biology/Life Cycle – Colonies consist of the brood and several types of adults; winged males, winged females, one or more queens and workers which are wingless. The brood is made up of cream colored eggs, larvae and pupae. The reproductive winged forms are most prevalent in spring and summer. Mating flights usually happen between April and June. Males die after mating. A queen in a large colony is capable of producing her own weight in eggs every day (1,500 or more). A typical mature fire ant colony will contain 80,000 workers, but some mounds contain as many as 240,000 workers. Queens can live 5 years or more.

Habitat – Almost any soil but prefers open, sunny areas such as pastures, parks, lawns, meadows and cultivated fields. They will also infest the vegetable garden. They love eggplant, okra, cabbage and broccoli. Fire ants do not like biodiversity. Feeding Habits: They are omnivorous and will feed on almost any animal or plant. They eat other insects, oils, sugars and young seedlings and saplings. Economic Importance: Tremendous economic problem due to electrical device damage. They also can injure baby animals. They do have a beneficial side. They control by eating ticks, chiggers, termites, boll weevils, fleahoppers, cotton bollworms, pink bollworms, tobacco budworms, pecan weevils, hickory shuckworms, flies, fleas, cockroaches, and corn earworms. They are beneficial predators when existing in controlled numbers.

Natural Control – Lizards, birds, other insects and microorganisms. Compost tea, and beneficial nematodes. Beneficial microorganisms in the compost tea and in the gut of nematodes seem to be doing the actually control. Laboratory tests have shown that the beneficial fungus Beauveria bassiana is effective against fire ants.

Organic Control – Drench with the fire ant control formula – compost tea/molasses/citrus oil. The commercial product is called Garden-Ville Fire Ant Control. Many gardeners report good results with instant grits, Malt-o-Meal and other instant break fast cereals. Spraying products that contain molasses helps keep them away. Apply beneficial microorganisms. Laboratory tests have shown that the beneficial fungus Beauveria bassiana is effective against fire ants.
Treatment of Stings – Treat the stings with vinegar, baking soda, orange oil or comfrey. If you are highly allergic, get to a doctor.

Neither toxic poisons nor chemical growth regulators are necessary to control fire ants. The concept of A&M’s new two step recommendation has one fatal flaw. It doesn’t work. It’s the same program that has been being used for years, and fire ants still rule. I know – used to use that program myself. The so-called “Earth-Kind” approach is to treat the site with baits then the mounds with contact poisons. The specific recommendations are to douse the mounds with the toxic chemicals like Orthene, an acephate that is water soluble. This and other lab-created poisons such as diazinon, Dursban and malathion are contaminating our soil and water supply. The baits, Logic and Award, are now listed by the EPA as probable carcinogens.

A totally organic approach works better and creates no contamination to the user, the soil, the air or the water. To control fire ants and other pests like fleas, termites, chinch bugs, ticks, crickets and grasshoppers, try this. It won’t hurt you and you’ll see great results.

Step 1: Spray the site with Garrett Juice plus orange oil or d-limonene at 2 ounces per gallon of spray. Homemade citrus oil can be made by soaking citrus peelings in an equal amount of water for 10 days to two weeks. Adding garlic-pepper tea makes the spray even more powerful. This same spray will also help control aphids, white flies, and mosquitoes. It will also kill beneficials so don’t use unless pests are a problem and don’t use more than the recommended rates of any of the citrus concentrates or risk burning plant foliage or even killing plants.

Step 3: Apply beneficial nematodes on problem areas. Be sure to apply these living organisms within the date deadline. They do have a shelf life.

Step 4: Spray the site at least monthly with Garrett Juice which is a mixture of manure compost tea, seaweed, natural vinegar and molasses. Long term this is the only step necessary.

Not only does this program get rid of fire ants, they usually stay gone. Recommendations by Michael Bosco:
Preventative maintenance

There are steps that can be taken to reduce the competitive edge of fire ants and as part of an overall organic program to control fire ants.

2. Treating the lawn spring and fall with nematodes Treat after sunset and follow-up with ½ inch of irrigation. Nematodes are live microscopic worms and need to be applied at the highest recommended rate and in a manor to ensure their survival.

3. Treat individual mounds with 1-1/2 ounces of citrus and a few drops of soap as a wetting agent per gallon of water. Treat each mound with one gallon of diluted mixture.

4. When large areas have bad infestations of fire ants, the next step up from the nematodes and citrus drench is applying baits on the whole property at 1-1/2 lb. per acre and one teaspoon of bait per mound. The baits we recommend are the ones containing abamectin because it is derived from a soil microorganism. At low concentrations abamectin acts as an insect growth regulator and when used on individual mounds it is a stomach poison. Baiting should be done in the spring and fall during times of active ant foraging. Test the timing and the bait’s palpability by applying a small amount to individual mounds and watch for a quick uptake. For mounds along sidewalks, house foundations etc. bait is normally required to get effective control, because the ant colony is protected under the concrete.

5. The next step up from the abamectin baits is the chemical growth regulators. These products do not kill ants, they obstruct their life cycle. This process is slow and should be looked at as a low toxic method to decreasing fire ant populations on large properties over a period of several months. Extinguish is a product that has demonstrated good results. As with most baits it is best used in the spring and fall when ants are actively foraging.

Ant Tip
To move a mound of these beneficial ants, cover it with shredded mulch. The ants will relocate to a spot where the opening to the mound is again in full sun.

Fire Ant Remedy – sprinkle a packet of aspartame (Equal or Nutra Sweet) on the mound. Ants will be gone the next day. Anyone eating or drinking anything containing this stuff is nuts!

Now (June 22, 2011) I’ve decided to insert the following links, because Aspartame really is a lethal poison.

And there are studies that show that it causes cancer (among other negative health effects).