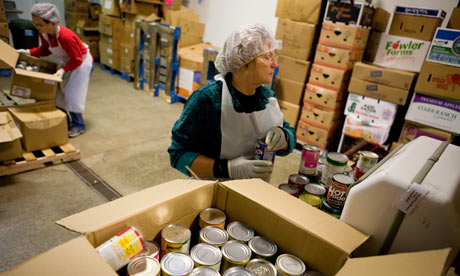 Each Friday, teachers in elementary schools in a corner of the richest country in the world quietly slip packs of peanut butter, fruit and granola bars into some pupils’ bags – enough food to get them through the weekend before school dinners resume on Monday.

Not a word is said to the pupils or their parents because, even as the number of families in West Virginia dependent on food handouts continues to rise, many are ashamed to admit to their friends and neighbours that they need help.

“The teachers spot the children they think aren’t getting enough to eat at home, those from families they know are having difficulties,” said Carla Nardella, who heads the state’s main food bank which distributes free boxes of groceries and supplies soup kitchens in West Virginia.

“These are proud people, so the teachers do it discreetly. We call them backpack snack packs, and started distributing them this year to give extra food to children because the situation is getting more difficult.

“We’ve begun with 400 children. It’s our hope that one day there will be a programme like this in every school in West Virginia, because there are children in every school who need help. It’s so hard seeing children go hungry.”

It is not just the children. One in six of West Virginia’s 1.8 million people receive government food stamps – one of the highest rates in the country – and the total is rising by the week.

Also in the food lines are elderly people who have seen their pensions wiped out by the stock market crash, families driven into destitution by medical expenses because they cannot afford insurance, and the large numbers of people who are perennially dependent on welfare in one of America’s poorest states.

But most of those on food stamps need more, and are forced to make use of handouts of groceries or to visit soup kitchens.

Nardella, who has been working with the West Virginia food bank for 25 years, says the programme is feeding 260,000 people a month, and increasingly entire families are looking for help.

“A few years ago I was working at a soup kitchen and there were a few men came in. You could tell they lived on the street. Go back now and there are families. There are parents bringing their children in and feeding them in the soup kitchen. That’s hard to do,” she said at the Mountaineer Food Bank headquarters in the small town of Gassaway in the centre of West Virginia.

“The people who go into a soup kitchen and take their families are people who thought they would never ever have to go in and get help.”

One of those families lives in a wooden house alongside a road into the hills beyond Gassaway. The white paint is peeling. Bicycles lie in the yard. They belong to the children, both in elementary school. On the wall hangs a copy of the national anthem. A battered car, nearly 30 years old, sits in the drive.

The parents say the neighbours know about their hardship, and the local church has helped them. But they don’t want their names known by a wider audience which, they think, will accuse them of being spongers.

“There’s a view of people on welfare. People around here think God helps those who help themselves,” said the father, who works in a fast-food outlet. “I have to drive 60 miles to work. It’s the price of gas [petrol] that killed us. It went up and then the price of food went up. I earn $6 [£4] an hour, and suddenly there wasn’t enough money.

“I never thought we would be asking for food, but if I want to keep the job I have to pay for the gas. I have to pay the utilities. What’s left goes on food, but there are four mouths to feed. It’s not enough,” he said. “We told the pastor. The pastor arranged for us to receive food.”

It’s a story heard across West Virginia these days. Ritchie Roach is the mayor of Gassaway, a town of about 950 people that has lost half its residents since a railway repair yard closed in the 60s. He also runs a restaurant and is the town’s funeral director. “No one wants to be mayor in a small town,” he said. “It’s tough. There’s no income.”

Roach says that while some residents have been left in a desperate situation by the local lumber industry shedding jobs, most of those forced on to food stamps and other welfare are still in employment.

“I blame everything on the price of gasoline. When it went up to $4 a gallon 18 months ago it affected everybody. It forced up the cost of food and utilities. People were working all day and they still weren’t earning enough to pay all the bills,” he said.

“Food prices you can combat a bit because people can grow their own gardens. They can kill deer, fox. You can eat ‘coon. But gasoline affects everybody. They just can’t make it.”

In West Virginia’s small towns it is often the churches that step in. Barbara Accord, a Presbyterian minister working with a coalition of churches in the United Christian Food Pantry to feed the poor, says that desperation has forced some families to abandon their homes and move in with others to save money.

“Families are moving in with other families because they can’t survive in their own households.

“They are giving up existing houses because they can’t afford them any more or they’re coming from another state because they’ve lost their jobs and this is where they come from.”

Accord says that her group is feeding about 150 families in and around Gassaway, with 10 households signing up each month.

In Tucker county, Roxanne Tusing is feeding growing numbers of older people. “We’re seeing more elderly people taking advantage of the hot meal at noon,” she said. “For some of them, it’s a situation where they’ve seen their retirement savings disappear with the downturn in the economy. They can barely make ends meet because their retirement income has vanished with the stock market.”

Those who help are divided on the question of whether people are more sympathetic towards those forced on to welfare now that so many of them are also holding down jobs. Nardella and Tusing describe the generosity of many ordinary people who go out of their way to help their neighbours. But Accord, Gassaway’s Presbyterian minister, says many people remain judgmental.

“There is an attitude toward people on welfare. There always has been because of the strong Protestant work ethic, the strong Bible-belt work ethic. There is that idea that people should do for themselves. I know a lot of really poor people who will not go on welfare, they’d rather suffer,” she said.

The mayor sees more understanding. “People have a different attitude now toward people who are working and have to go on welfare. They say they understand if the wife can’t find a job and they’ve got two or three children, maybe going 40 miles to work every day, they just can’t make it,” he said.

Nardella says she longs for the day when she is out of business because food banks are no longer necessary, and that it is a poor reflection on the US that there should be hungry people in the richest country in the world.

“I think it’s a shame, because we have plenty of resources in this country. If things were spread a little more evenly we could see an end to hunger,” she said.

Does she think she’ll see that in her lifetime? “Probably not.”