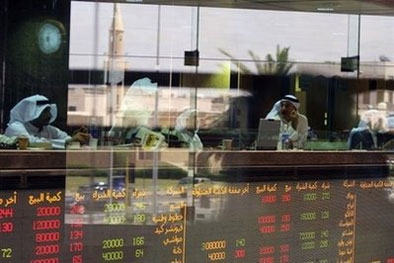 Kuwait Stock Exchange has dived more than 53% since late June

KUWAIT CITY – Overall net profits of Kuwaiti firms listed on the Kuwait Stock exchange plummeted by more than 90 percent last year due to the global economic meltdown, an economic study said on Sunday.

There are 204 companies listed on the Kuwaiti bourse. The fiscal year of eight companies does not end on December 31 while 24 others have failed to announce results and as a result the bourse has suspended them from trading.

Twenty-seven companies saw a rise in their profits last year while the remaining 145 firms either reported a sharp decline in profits or incurred a loss, Al-Shall said.

The biggest decline was made by investment firms which chalked up a total loss of 1.4 billion dollars last year, down from an aggregate net profit of 3.9 billion dollars in 2007, the consultancy said.

The losses are likely to increase since most of the companies that did not announce results are also investment firms and are expected to register losses.

Kuwaiti investment firms have been hard-hit by the global financial crisis as their assets slumped and new credit became difficult to obtain.

The Kuwait Stock Exchange has dived more than 53 percent since it peaked at 15,654 points in late June. More than 110 billion dollars have been wiped off its market value, which has plunged to around 100 billion dollars.