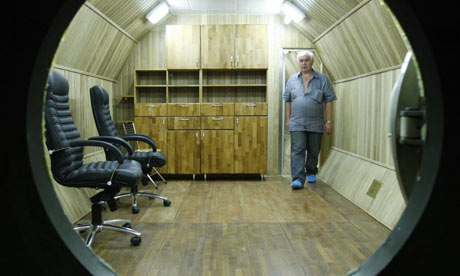 A member of the research team in one of the modules where the experiment will take place Photograph: Pavel Zelensky/AFP/Getty Images

In a car park not so far away … It is a big brother experiment like no other, an experiment which will boldly go where few have gone – or probably wanted to go – before.

Six apparently fearless volunteers are to take part in a unique test by being locked up in what amounts to a series of small steel tins off a parking lot in Moscow for 105 days as scientists simulate a space rocket ride to Mars.

On Tuesday the team will step into a chain of cramped metal capsules, connected by cables and corrugated metal pipes, in a hangar at the back of the Institute of Medical and Biological Problems (IMBP) in the Russian capital, swing close the hatch and “blast off”.

The idea is for the 550 cubic-metre “ground exploration complex” (GEC) to recreate as closely as possible the atmosphere of a spacecraft racing through the solar system, bombarded by cosmic radiation. Any return flight to Mars – at least 34 million miles from our planet – would take between 18 months and three years, including landing and exploration.

The volunteers – four Russians, a French airline pilot and a German army engineer – will be kept under constant camera surveillance to record the physical and psychological impact of their time in the isolation chamber.

They will eat packaged rations, wash with damp tissues and spend several hours each day conducting experiments, just as astronauts would on a real space flight. They will use the same toilet as crew on the international space station, which has fans to propel waste into a “sanitary receptacle”. They will eat together, work out in a tiny gym – and may even get in to the odd punch-up.

Mark Belokovksy of the IMBP admitted the psychological pressure of living in close quarters with five other human beings could crack even the toughest guinea pigs.

“Tension is inevitable,” he said candidly. The fact the 105-day “flight” will be a single-sex trip on this occasion may be a blessing. During a similar experiment in 1999 the participants were given vodka to celebrate New Year’s Eve: two members then got in a fist fight after one tried to kiss a female volunteer from Canada.

The capsules have no windows and the explorers’ only contact with the outside world will be via an internal email system and a delayed radio link to the “control centre” positioned alongside the GEC.

Each member of the team has a narrow bed and only three cubic metres of personal space. They can take one bag with books and DVDs with them, but will have no access to television or the internet.

“Just like cosmonauts we will have eight hours sleep, eight hours work and eight hours for personal matters – intake of food, physical exercise and free time,” said Sergei Ryazansky, 34, a space research expert, who will lead the crew.

Crew members are expected to deal with all but the severest medical emergencies themselves – one of the Russian volunteers is a doctor – although each maintains the right to quit the project at any moment without giving a reason.

While the virtual journey cannot recreate weightlessness – without going into space that is only possible for brief periods in an aircraft – separate tests may be used to simulate the long-term effects of zero gravity. Head-down bed-rest tests, where a volunteer stays for weeks or months in a bed that slopes by six to eight degrees towards the head, recreate the redistribution of blood in the body without gravity.

Other experiments will monitor microbiological contamination using an “electronic nose” and examine the effect of long periods of restricted activity on the bones of the crew members.

Since the Apollo flights of the late 1960s and early 1970s there have been no manned flights beyond Earth’s orbit. While a flight to Mars is thought to be 20 to 30 years away, Belokovsky said conducting such experiments brought the date ever closer. “The knowledge gleaned from the experiment will be invaluable in planning for such a trip,” he said.

Volunteers on the 105-day stint will receive a payment of €15,000 (£14,000), but Belokovksy said money was not the main motivating factor. “They are driven by the chance to take part in an experiment of international significance,” he said.

What will happen to the huamn guinea pigs? Dr Claudia Herbert, chartered clinical psychologist and clinical director of the Oxford Stress and Trauma Centre, explains:

“Obviously three months in a capsule is going to be a highly stressful experience and I wonder what preparation and testing the Russian authorities have conducted in choosing and preparing these volunteers for the experiment. They are going into a small social group from which no one can escape, with different personalities, temperaments, cultures and languages. It will be like being stuck in a lift, which can be very stressful even in ordinary conditions – we all have a personal space which we do not like to be invaded by others. What happens in groups is that somebody will crystalise as the leader and in these circumstances, depending on how carefully the group has been chosen and bearing in mind the sort of people who volunteer for these sorts of exercises, there may be two or three displaying leadership characteristics. They are likely to be risk takers and strong personalities, which in itself can make cooperation difficult. It would be good if they have had some mindfulness training: clearing their minds, meditating, taking deep breaths: being aware what is going on in your own mind and learning not to be affected by others. I hope the volunteers do not have vulnerability factors such as traumas from their past that they may not have thought about but which may now surface in such stressful conditions.”