The economic crisis is still at the beginning. 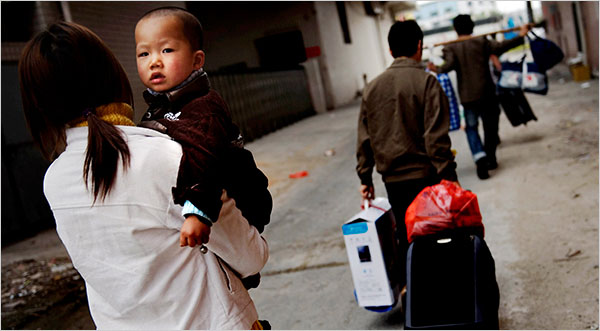 Migrants left Guangzhou, China, after the factory where they worked closed

Since it was founded by his great-grandfather in 1880, Carl Martin Welcker’s company in Cologne, Germany, has mirrored the fortunes of manufacturing, not just in Europe but around the world.

That is still true today. In a pattern familiar to industrial businesses in Europe, Asia and the United States, Mr. Welcker says his company, Schütte, which makes the machines that churn out 80 percent of the world’s spark plugs, is facing “a tragedy.”

Orders are down 50 percent from a year ago, and Mr. Welcker is cutting costs and contemplating layoffs to prevent Schütte from falling into the red.

That manufacturing is in decline is hardly surprising, but the depth and speed of the plunge are striking and, most worrisome for economists, a self-reinforcing trend not unlike the cascading bust that led to the Great Depression.

In Europe, for example, where manufacturing accounts for nearly a fifth of gross domestic product, industrial production is down 12 percent from a year ago. In Brazil, it has fallen 15 percent; in Taiwan, a staggering 43 percent.

Even in China, which has become the workshop of the world, production growth has slowed, with exports falling more than 25 percent and millions of factory workers being laid off.

In the United States, until recently a relative bright spot for manufacturing despite the steady erosion of blue-collar jobs, industrial output fell 11 percent in February from a year ago, according to statistics released Monday by the Federal Reserve.

“Manufacturing has fallen off the cliff, and it’s certainly the biggest decline since the Second World War,” said Dirk Schumacher, senior European economist with Goldman Sachs in Frankfurt.

The pattern of manufacturing and trade ominously recalls how the financial crisis of 1929 grew into the Great Depression: tightening credit and consumer fear reduced demand for manufactured goods in one country after another, creating a downward spiral that reduced global trade.

“Plunging manufacturing suggests that as bad as things were in the fourth quarter, they are at least as bad now,” said Robert J. Barbera, chief economist at ITG, a New York research and trading business. “This is a classic adverse feedback loop. It won’t quickly correct itself.”

That means more workers can expect to lose their jobs around the world in coming months as manufacturers continue to cut production, especially as global trade contracts.

In fact, trade is shrinking even faster than production. Germany’s exports down are 20 percent from a year ago, Japan’s have plunged 46 percent, and in the United States, exports fell at an annualized rate of 23.6 percent in the fourth quarter of 2008.

Mr. Welcker says he has never seen anything like it. For parallels, he has to hark back to the Great Depression and World War II, when Schütte’s factory was destroyed.

After focusing on Germany and Europe in the decades after the war, Schütte thrived recently as globalization opened new markets in Eastern Europe and Asia. In the last five years, Schütte’s sales soared to about 100 million euros ($131 million) from 58 million.

The sudden reversal in global manufacturing suggests that Americans should not expect economic relief from abroad soon, despite a slightly more optimistic mood on Wall Street lately and President Obama’s call for more stimulus spending by foreign governments.

While manufacturing equals about 14 percent of gross domestic product in the United States, it totals 18 percent worldwide, and accounts for 33 percent of G.D.P. in China, according to the World Bank.

That means that China, Brazil, India and other fast-growing emerging market countries that have escaped the worst of the fallout from the credit crisis will increasingly suffer, dragging down demand in more advanced Western economies even as government-led stimulus packages kick in.

The damping effect works both ways.

Despite the misperception that America no longer makes anything, falling demand for goods made in the United States, including jet engines, locomotives, medical equipment, pharmaceuticals and some high-tech products, will hurt American growth prospects.

“Manufacturing makes up about two-thirds of U.S. exports, and contributed more to G.D.P. growth over the last 20 years than any other sector of the U.S. economy,” said David Huether, chief economist for the National Association of Manufacturers in Washington. “Our share of global manufacturing output has remained steady at 20 to 23 percent over the past decade.”

Toyota halted work at its 12 auto plants in Japan beyond its normal break in February and March. It also cut its production forecast for the year ending March 31 by 20 percent, to slightly more than seven million vehicles, and has warned that it will post a net loss of 350 billion yen ($3.6 billion), its first in decades.

In Europe, new figures for January manufacturing are due Friday, and they are expected to show that the decline is still worsening.

Although the problems of manufacturers supplying the auto industry and other so-called big iron manufacturers of products like locomotives, jet engines and power turbines have gotten the most attention, makers of a variety of other products, including handicrafts, clothes and jewelry, are suffering too.

India’s manufacturing sector, which accounts for about 16 percent of G.D.P., recently recorded its first quarterly production decline in more than a decade.

Since last April, handicraft exports have fallen by 55 percent to $1.35 billion, and textile makers estimate they have slashed half a million jobs. Banks, meanwhile, are restructuring loans for diamond makers and polishers.

And despite tax cuts and a $64 million stimulus package announced in February, Indian textile makers are pushing for more government help.

At Schütte, which has 550 workers and is emblematic of Germany’s bedrock Mittelstand sector of family-run businesses, perilous times are part of the company’s history.

Mr. Welcker recalls family tales of trucks filled with cash to pay workers during the hyperinflation of the Weimar era, and how after G.I.’s crossed the Rhine in 1945 near where his factory stands today, “not one stone stood atop another.”

Today, he is thankful the situation is nothing like those days. “But the speed of the decline in orders,” he said, “is the worst we’ve ever seen.”