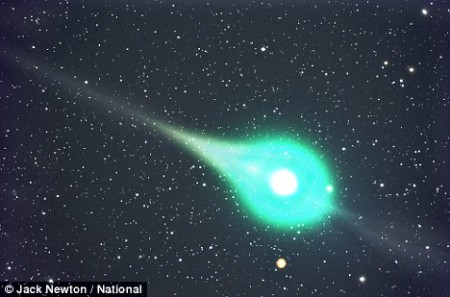 – Green light for a close encounter: ‘Jupiter-sized’ comet to streak past Earth tonight (Mail on Sunday):
We have known of its existence for only two years. But if you raise your eyes heavenwards over the next few nights, you might just catch a glimpse of the comet Lulin. Glowing green, it will come within 38million miles of Earth, the closest it has ever been, and about the same distance away as Mars.

– US carbon-tracking satellite crashes (Financial Times):
The US government’s pioneering attempt to map carbon dioxide levels in the Earth’s atmosphere flopped on Tuesday when a satellite plunged into the southern Pacific Ocean near Antarctica. The $278m Orbiting Carbon Observatory… (… flushed down the toilet.)

– UK Army may use James Bond-style spy camera (Telegraph):
British soldiers and anti-terrorist police may soon be using a new James Bond-style spy camera hidden in a gadget the size of a cricket ball. The ball can be thrown at enemy suspects and will then send back pictures of their movements using wireless technology, the Daily Mirror said.It was first successfully used by Israeli forces during the Gaza conflict last month.

– Thousands of police to lose jobs as forces feel the pinch (Times):
Large numbers of police forces are planning to cut thousands of officers despite the threat of a recession-driven surge in crime and disorder. Representatives from dozens of police forces contacted by The Times last night gave a grim picture of falling numbers and “significant and painful” cuts.

– Obama flops on secrecy (Houston Chronicle):
A few days ago in a San Francisco courtroom, the Obama administration faced a crucial early test — and, in the view of many liberal supporters, failed miserably.

– Stanford Had Links to a Fund Run by Bidens (Wall Street Journal):
A fund of hedge funds run by two members of Vice President Joe Biden’s family was marketed exclusively by companies controlled by Texas financier R. Allen Stanford, who is facing Securities and Exchange Commission accusations of engaging in an $8 billion fraud.

– Bank Nationalization Isn’t the Answer (Wall Street Journal):
Trust me. I’ve done this before. Mr. Isaac, chairman of the FDIC from 1981-1985, is chairman of the Washington financial services consulting firm The Secura Group, an LECG company.

– High street job losses hit record level in UK (Guardian):
The CBI’s latest distributive trades survey showed that a balance of -49% of retailers said they had cut staff numbers in February, the worst level since the quarterly survey began in August 1983. A similar record rate of job cuts is expected for March.

– ECB’s Trichet sounds alarm over Europe’s credit contraction (Telegraph):
The eurozone’s financial system is under “severe strain” and risks setting off a downward spiral as the banking crisis and economic recession feed on each other, according to European Central Bank president Jean-Claude Trichet.

– Chapter 11 an option for Chrysler and GM (Financial Times):
Law firms advising the US Treasury are preparing for possible bankruptcy protection for General Motors and Chrysler, US officials acknowledged on Monday.

– Vatican complains to Israel about ‘blasphemous’ TV programme (Telegraph):
In the programme, the host denied Christian traditions – that Mary was a virgin and that Jesus walked on water – saying he would do so as a “lesson” to Christians who deny the Holocaust, a reference to the Vatican’s recent lifting of the excommunication of a bishop who denied 6 million Jews were killed during the Second World War. The rehabilitation sparked outrage among Jews.

– US set to offer ‘substantial’ aid to Gaza (Scotsman)

– Scientists discover genetic ‘off switch’ for series of cancers (Scotsman):
SCIENTISTS have identified a cancer “master switch” that could open the door to revolutionary new treatments, research published today reveals.

– UK blood enquiry finds fault in US practices (Philippines News):
Tainted blood supplies in Britain and other countries were partially responsible for the spread of Hepatitis-C and the HIV virus that causes AIDS.

– 50 Child prostitutes rescued by FBI (Telegraph):
The FBI has rescued nearly 50 child prostitutes in the United States, some as young as 13, in a nationwide operation against the trafficking of children for sex.