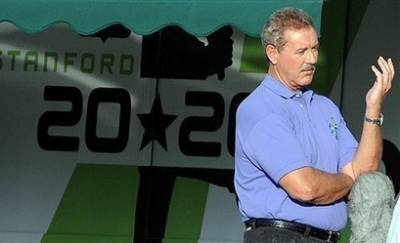 Texas financier Allen Stanford, pictured in 2008, who is alleged to have committed multibillion dollar fraud, has been located in Virginia, the FBI confirmed on Thursday. (AFP/File/Jewel Samad)

Stanford is not under arrest and is not in custody.

In a civil papers Tuesday, the SEC alleged Stanford and three of his companies committed an $8 billion fraud that lured investors with promises of improbable and unsubstantiated high returns on certificates of deposit and other investments.

Until regulators got help Thursday from the FBI, the SEC had not been able to find Stanford.

A law enforcement official said the billionaire was served around 1:45 p.m. while sitting in a car, and authorities do not believe he had been purposely hiding or fleeing. Under the terms of the court case, Stanford had to surrender his passport. The official spoke anonymously because he was not authorized to discuss specifics of the case.

Stanford has not been charged with any crime, though federal agents continue to investigate the case.

The fallout from the fraud case is already rattling around the global financial system.

Venezuela on Thursday seized a failed bank controlled by Stanford after a run on deposits there, while clients were prevented from withdrawing their money from Stanford International Bank and its affiliates in a half-dozen other countries.

Stanford’s father, James Stanford, told The Associated Press in Mexia, Texas, on Thursday that he hopes the allegations aren’t true. “I have no earthly knowledge of it,” said the elder Stanford, listed as chairman emeritus and a director for Stanford Financial Group. “I would be totally surprised if there would be truth to it. And disappointed, heartbroken.”

Asked what advice he would give his son, Stanford, 81, said: “Do the right thing.”

Stanford, 58, is a larger-than-life figure in the Caribbean, using his personal fortune — estimated at $2.2 billion by Forbes magazine — to bankroll public works and cricket tournaments.

He also is a major player in U.S. politics, personally donating nearly a million dollars, mostly to Democrats. At 6-feet-4 and 240 pounds, he towered over House Speaker Nancy Pelosi while giving her a warm hug at the Democratic National Convention last year.

He owns a home in the U.S. Virgin Islands and operates businesses from Houston to Miami and Switzerland to Antigua, where he holds citizenship and the government knighted him in 2006 in recognition of his economic influence and charity work.

In an e-mail to his employees last week, Stanford said his company was cooperating with the probe and vowed to “fight with every breath to continue to uphold our good name and continue the legacy we have built together.”

A federal judge appointed a receiver to identify and protect Stanford’s assets worldwide, including about $8 billion managed by the Antigua-based Stanford International Bank, which has affiliates in Mexico, Panama, Colombia, Ecuador, Peru and Venezuela.

Also frozen were assets of Houston-based Stanford Capital Management and Stanford Group Co., which has 29 brokerage offices around the U.S.