A “second wave” of countries will fall victim to the economic crisis and face being bailed out by the International Monetary Fund, its chief warned at the G7 summit in Rome. 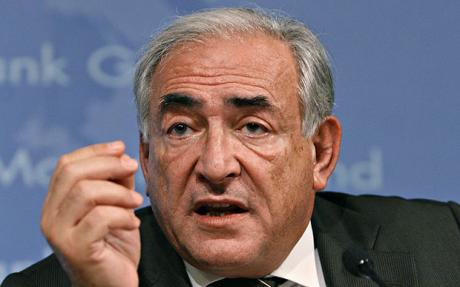 Dominique Strauss-Kahn’s warning comes amid growing concern that at some point in the next year a major economy could have to seek support from the Fund. Mr Strauss-Kahn, who was yesterday attending the Group of Seven leading finance ministers’ meeting in Rome, said: “I expect a second wave of countries to come knocking.”

The IMF managing director also said the rich world was now in the midst of a “deep recession”. It came as the G7 pledged to avoid slipping into protectionism and repeating the same political and economic mistakes as were made in the 1930s. Ministers also pledged to do more to support their banking systems, sparking speculation that a number of countries, including Germany and France, will unveil new bail-outs and possibly set up “bad banks” as they scramble to fight the crisis.

But with some countries’ economies effectively dwarfed by the size of their banking sector and its financial liabilities, there are fears they could fall victim to balance of payments and currency crises, much as Iceland did before receiving emergency assistance from the IMF last year.

Some have speculated that the UK may have to seek IMF support if capital markets become frightened of the size of its foreign financial liabilities, which increasingly appear to have become supported by the state. But there are a swathe of Eastern European countries which appear particularly vulnerable and may need IMF support.

With the Fund’s war chest expected to run dry later this year, the Japanese confirmed in Rome that they would supply an extra $200bn of capital to the Washington-based institution.

Mr Strauss-Kahn, who warned recently that his resources could run dry within six months, said: “This is the largest loan ever made in the history of humanity.

“The biggest concrete result of this summit is the loan by the Japanese… now I will continue with the objective of doubling the Fund’s resources.”

He added that it was now essential for countries to support their banking sectors.