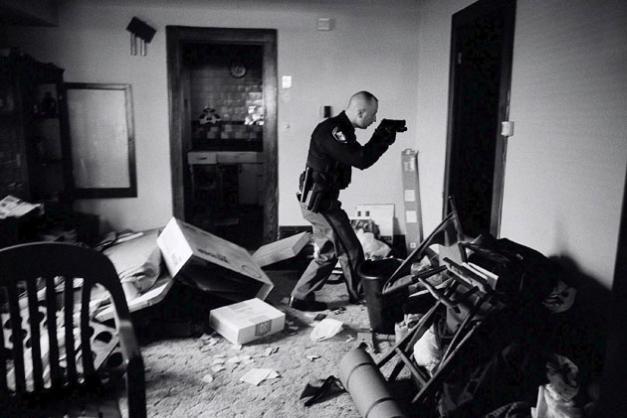 This picture by US photographer Anthony Suau, for Time won the World Press Photo of the Year 2008 award, it was announced by the organisers on 13 February 2009 in Amsterdam, The Netherlands. US Economy in Crisis: Following eviction, Detective Robert Kole must ensure residents have moved out of their home in Cleveland, Ohio, 26 March 2008.

– G7 sets sights on new world economic order (AFP):
ROME (AFP) – The world’s richest nations called Saturday for urgent reform of global finance to save the world from the economic devastation that is dragging more and more countries into recession. Italy’s Finance Minister called for a “new world economic order” as he wrapped up the crisis meeting of finance leaders from the Group of Seven leading economies over which he presided here.

– US stimulus clears Congress (Financial Times):
The biggest economic stimulus in US history cleared the US Congress late on Friday night.

– Britain’s bankers plumb new depths (Times Online):
Jon Moulton, the private equity chief, warned a City lunch this week that he feared serious civil unrest. There was, he said, a 25 per cent chance of one of the 15 member countries of the eurozone pulling out of the currency club. That, he said, would be a catastrophic shock leading to a “far greater financial crisis” than the current one.

– Europe’s industrial base may never recover from crisis (Telegraph):
The European Commission has issued a red alert over the unprecedented collapse of industrial production, warning that EU states are running out of money for rescue packages.

– Car sales across Europe plunge to 20-year low (Times Online):
France proved most resilient in terms of the drop in its market with a fall of 7.9 per cent while Germany, the Continent’s biggest seller, experienced a 14.2 per cent fall. The decline in the British market, published last week, was 30.9 per cent. In Western Europe the biggest falls were in Italy, at 32.6 per cent, and Spain, with 41.6 per cent.

– 100000 Parents of Citizens Were Deported Over 10 Years (New York Times):
WASHINGTON — Of nearly 2.2 million immigrants deported in the decade ended 2007, more than 100,000 were the parents of children who, having been born in the United States, were American citizens, according to a report issued Friday by the Department of Homeland Security.

– Europe set for deep recession, economists warn (Telegraph):
The Eurozone economy, whose biggest members are Germany and France, shrank 1.5pc in the fourth quarter compared with the third quarter – a steeper fall than economists had expected. Germany had the worst fall, with the economy shrinking the most since the country was reunified in 1990.

– Mystery of New York flight that dropped out of sky, killing 49 in Buffalo suburb (Times Online)

– Blackwater Sheds Name, Shifts Focus (Washington Post):
Blackwater Worldwide, a private security (mercenary) company whose work in Iraq was plagued by trouble, said yesterday that it is changing its name to Xe as it shifts its business focus.

– Four More US Banks Are Shut, Bringing Total for Year to 13 (Bloomberg)