How can you vote on a bill, when you never had a chance reading it???

Congressman Ron Paul speaks outside the Capitol Building on legislative process and the passage of the Stimulus bill. 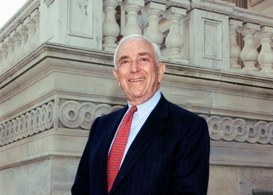 (CNSNews.com) – Sen. Frank Lautenberg (D-N.J.) predicted on Thursday that none of his Senate colleagues would “have the chance” to read the entire final version of the $790-billion stimulus bill before the bill comes up for a final vote in Congress.

“No, I don’t think anyone will have the chance to [read the entire bill],” Lautenberg told CNSNews.com.

The final bill, crafted by a House-Senate conference committee, was posted on the Website of the House Appropriations Committe late Thurday in two PDF files.

The first PDF was 424 pages long and the second PDF was 575 pages long, making the total bill 999 pages long. The House is expected to vote on this 999-page bill Friday, and the Senate either later Friday or Saturday. [Editor’s note: The first PDF, as posted on the House Appropriations Committee website as of 8:20 AM Friday morning, had grown by 72 pages to 496 pages, increasing the length of the total document to 1,071 pages.]

Of the several senators that CNSNews.com interviewed on Thursday, only Sen. George Voinovich (R-Ohio) claimed to have read the entire bill–and he was speaking of the preliminary version that had been approved by the Senate, not the final 999-page version that the House-Senate conference committee was still haggling over on Thursday afternoon.

When CNSNews.com asked members of both parties on Capitol Hill on Thursday whether they had read the full, final bill, not one member could say, “Yes.”

And only one–Voinovich–volunteered that he had actually read the version of the bill that had passed the Senate.

Both Republicans and Democrats told CNSNews.com they were eager to read the unseen bill–once they could get get their hands on a copy of the final legislation.

Nonetheless, members from both sides of the aisle in both the House and Senate admitted they doubted they would have adequate time to read the bill before they actually voted for it.

“Certainly I hope to have the opportunity to go through [the bill] before the vote takes place,” said Sen. Bob Corker (R-Tenn.) told CNSNews.com. “But that’s something I’ve found doesn’t always happen around here.”

Some lawmakers said one of the reasons they would not vote for the bill was because there would be no time to study it before it came up for a vote.

“The Democrats have thrown this at us very last-minute,” said Rep. Zach Wamp (R-Tenn.). “That’s why the rule of thumb in the United States Congress should be, ‘When in doubt, vote no,’ because the devil is in the details and that’s why this stimulus is not worthy of support.”

Rep. John Boozman (R-Ark.) shared that sentiment. “The American public expects for us to get in and know what we’re voting on,” Boozman said. “But there are very few members from Congress that are going to have time to actually read this thing.”

“This is not light reading,” Boozman added. “It’s difficult reading, it involves policy and things.”

“Right now, because of those things, I will probably vote against it,” he added.

Sen. Roland Burris (D-Ill.), President Barack Obama’s successor in the Senate, seemed baffled by the thought of actually reading the entire bill–as did his press secretary.

“I think it’s about 800 pages,” Burris’s press secretary said before laughing lightly. “We’ll do the best we can.”

Sen. John Thune (R-S.D.) said that due to the hasty process, he may not have time to read the whole bill.

“I will, as much as I can, get through all the changes that occurred in the conference committee,” says Thune.

“That’s assuming we have time to review it prior to the vote,” he added, “This is a very rushed process, the whole process, starting from the beginning has been very rushed.”

But the Ohio Republican wasn’t sure if his colleagues would be as meticulous as he had been. “I don’t know,” he said, when asked if he thought others would read every line of the bill. “You’ll have to ask them.”

The bill is expected to land on President Obama’s desk no later than Monday, and the president is expected to sign it into law–whether the nation’s lawmakers have read it or not.