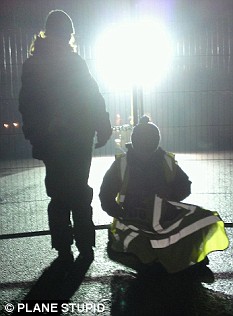 Target: Members of the Plane Stupid group, pictured on the runway at Stansted Airport in December, could be under scrutiny from the new unit

A secret police intelligence unit has been set up to spy on Left-wing and Right-wing political groups.

The Confidential Intelligence Unit (CIU) has the power to operate across the UK and will mount surveillance and run informers on ‘domestic extremists’.

Its job is to build up a detailed picture of radical campaigners.

Targets will include environmental groups involved in direct action such as Plane Stupid, whose supporters invaded the runway at Stansted Airport in December.

The unit also aims to identify the ring-leaders behind violent demonstrations such as the recent anti-Israel protests in London, and to infiltrate neo-Nazi groups, animal liberation groups and organisations behind unlawful industrial action such as secondary picketing.

The CIU’s role will be similar to the ‘counter subversion’ functions formerly carried out by MI5.

The so-called reds under the bed operations focused on trade unionists and peace campaigners but were abandoned by MI5 to concentrate on Islamic terrorism.

The unit is being set up by the Association of Chief Police Officers (Acpo) and will be based at Scotland Yard in Central London.

An internal police job advertisement for the ‘Head of Confidential Intelligence Unit’, obtained by The Mail on Sunday, reveals key details of its wide-ranging powers.

The advert says the unit will work closely with Government departments, university authorities and private sector companies to ‘remove the threat of criminality and public disorder that arises from domestic extremism’.

The CIU will also use legal proceedings to prevent details of its operations being made public.

Its chief will play an active part in obtaining Public Interest Immunity Certificates from Government Ministers, and will attend ‘legal meetings regarding sensitive source material’.

Another vacancy, for an administration officer, states that the CIU will be involved in the collection of ‘secret data’.

The job descriptions indicate that the postholders will have links with MI5.

Details of the senior vacancies were circulated to police forces last year – the closing date for applications was November 14, 2008.

The top job was open to officers of at least the rank of Detective Chief Inspector.

MI5’s counter subversion role led to it compiling files on Left-wing student activists in the Sixties and Seventies.

These included records on Jack Straw and Peter Mandelson.