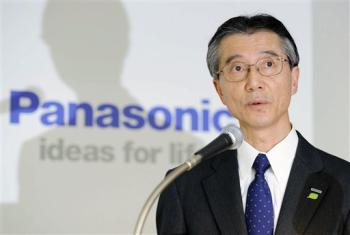 Panasonic blamed the dismal results on the global slowdown set off by the U.S. financial crisis, the rapid surge of the yen and sudden price drops. Sales slid in a wide range of products, including flat-panel TVs, DVD recorders, microwaves, lamps and semiconductors, it said.

The Osaka-based manufacturer plans to cut the jobs – half of which will come in Japan – by the end of March 2010. They amount to about 5 percent of its 300,000-strong global work force.

Panasonic also will shutter 14 overseas plants and 13 plants in Japan by the end of March to adjust production and cut costs, company spokesman Akira Kadota said. The company said it has 230 production sites around the world but declined to give a regional breakdown.

“The company’s business conditions have worsened particularly since last October, due mainly to the rapid appreciation of the yen, sluggish consumer spending worldwide and ever intensified price competition,” it said in a statement.

Koya Tabata, electronics analyst with Credit Suisse in Tokyo, said Panasonic’s decision to reshape its operations and speed up job cuts was positive, resulting in 300 billion yen in cost savings for the fiscal year through March 2010.

He also commended the company’s relatively quick efforts to adjust inventory and reduce investments to boost profitability in coming months.

Panasonic reported a 63.1 billion yen ($709 million) loss for the fiscal third quarter, down from a 115.2 billion yen profit the same quarter the previous year.

The last time Panasonic reported an annual loss was for the fiscal year ended March 2002, when a global electronics slump and massive restructuring costs contributed to 431 billion yen in red ink.

Since then, the company has been shedding money-losing businesses and focusing on key products such as plasma display TVs to turn itself around.

The company, formerly named Matsushita Electric Industrial Co., for its founder, also lowered its sales forecast for the fiscal year ending March 31, to 7.75 trillion yen from an earlier 8.5 trillion yen.

Panasonic will delay by a half year starting production at two Japan plants – one for plasma panel TVs to July 2010, and another for liquid crystal display TVs until January 2010, in response to slipping demand for flat-panel TVs, it said.

The latest restructuring measures will cost an additional 190 billion yen on top of the 155 billion yen Panasonic has already announced for the fiscal year through March.

Rival Japanese manufacturer Sony Corp. is forecasting a 150 billion yen net loss for the fiscal year through March. The last and only time Sony reported a loss – the fiscal year ending March 1995 – the red ink came from one-time losses in its movie division, marred by box office flops and lax cost controls.