‘Change’ you can ‘believe’ in. 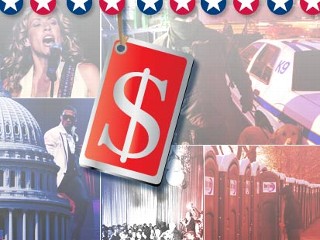 The country is in the middle of the worst economic downturn since the Great Depression, which isn’t stopping rich donors and the government from spending $170 million, or more, on the inauguration of Barack Obama .

The actual swearing-in ceremony will cost $1.24 million, according to Carole Florman, spokeswoman for the Joint Congressional Committee on Inaugural Ceremonies.

It’s the security, parties and countless Porta-a-Potty rentals that really run up the bill.

And then there is the party bill.

“We have a budget of roughly $45 million, maybe a little bit more,” said Linda Douglass, spokeswoman for the inaugural committee.

That’s more than the $42.3 million in private funds spent by President Bush’s committee in 2005 or the $33 million spent for Bill Clinton’s first inaugural in 1993.

Douglass said that this will be the “most open and accessible inauguration in history,” with members of the general public able to participate on a greater scale than ever before.

“The money is going toward providing events which we hope are going to connect people, make them feel like we are all in this together and reinforce the notion that when we pull together, we’re stronger,” Douglass said. “And we need to pull together to face the challenges that are before us today.”

Among the expenses: a Bruce Springsteen concert, the parade, large-screen TV rentals for all-free viewing on the national Mall, $700,000 to the Smithsonian Institution to stay open and, of course, the balls, including three that are being pitched as free or low cost for the public.

But there are plenty of rich donors willing to pick up the tab.

“They are not the $20 and $50 donors who helped propel Obama through Election Day,” said Massie Ritsch, communications director for the Center for Responsive Politics. “These are people giving mostly $50,000 apiece. They tend to be corporate executives, celebrities, the elite of the elite.”

Best Seats in the House

The biggest group of donors were none other than the recently bailed-out Wall Street executives and employees.

“The finance sector is well represented, despite its recent troubles,” Ritsch said. “Those who worked in finance still managed to pull together nearly $7 million for the inauguration.”

“I don’t think that they’re going to get a whole lot of face time with the new president himself,” Ritsch said, “but they are certainly establishing themselves from day one as his biggest financial supporters. And if there’s something they need or to tell him down the road, they will have an easier time doing that than everyone else.”

Besides Wall Street firms, a large chunk of the money came from employees at companies such as Microsoft, Google and DreamWorks Animation, according to the Center for Responsive Politics.

Billionaire investor George Soros and his family contributed $250,000 to the inauguration, and Google co-founder Larry Page and CEO Eric Schmidt each donated $25,000.

Despite all the donations, Obama’s team has made donations much more restrictive than in the past.

Obama capped donations at $50,000 per person, which is still more than 10 times what individuals could give to his campaign, but a lot less than the $250,000 cap President Bush had at his last inauguration. Contributions from corporations, labor unions, political action committees and registered lobbyists are not being accepted by Obama.

For Bill Clinton’s second inaugural in 1997, contributions were capped to $100. But that committee had some leftover money from the previous inauguration and charged people up to $3,000 for inaugural tickets.

“We have the broadest fundraising restrictions in inaugural history,” Douglas said.

The inauguration team is also posting all donations of $200 or more on the Internet almost as quickly as they are coming in. The law only requires it to disclose the information 90 days after the actual swearing-in.

“The transparency of this inaugural fundraising effort is unprecedented as far as we can remember,” Ritsch said. “We see that as a positive step and hope it’s an indication that President Obama will use technology to make government more responsive and transparent to people.”

That’s all the play money. The bulk of cash will actually be spent on security and logistics.

In a letter to members of Congress, the governors of Maryland and Virginia, and the mayor of Washington said that their combined costs could exceed $75 million. That’s on top of the $49 million the federal government is spending, again mostly for security.

“The historical significance of inaugurating the first African-American president of the United States alone makes the event unprecedented,” they wrote. “Given its political significance, we expect that the event will be attended by hundreds, if not thousands, of elected U.S. government officials and foreign dignitaries. Turnout by the general public for the swearing-in ceremony alone is likely to exceed 2 million. Transportation officials estimate that roughly 10,000 charter buses will enter the District with approximately 500,000 riders alone, a number which nearly matches the city’s population.”

The emergency managers for the three jurisdictions said they expect this to be the most complex and challenging inaugural in history.

“The mass of attendees expected will challenge fire, law enforcement, emergency medical and mass transit capabilities,” the governors and mayor wrote. “Moreover, the high volume of buses/traffic, weather factor and other threats will create additional demands.”