“The suspension of payments is the latest radical move by officials to help keep the state from running out of cash as Gov. Arnold Schwarzenegger and the Legislature battle over how to avoid insolvency.”

John Chiang announces that his office will suspend $3.7 billion in payments owed to Californians starting Feb. 1, because with no budget in place the state lacks sufficient cash to pay its bills. 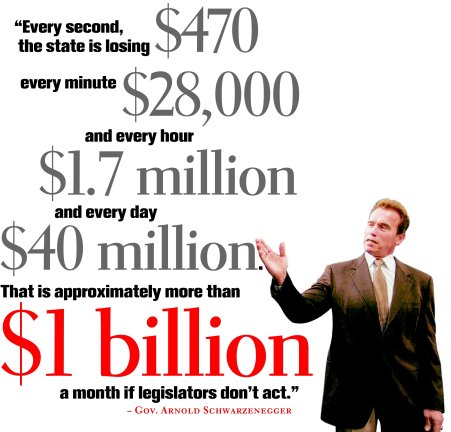 Chiang said he had no choice but to stop making some $3.7 billion in payments in the absence of action by the governor and lawmakers to close the state’s nearly $42-billion budget deficit. More than half of those payments are tax refunds.

The controller said the suspended payments could be rolled into IOUs if California still lacks sufficient cash to pay its bills come March or April.

“It pains me to pull this trigger,” Chiang said at a news conference in his office. “But it is an action that is critically necessary.”

The payments to be frozen include nearly $2 billion in tax refunds; $300 million in cash grants for needy families and the elderly, blind and disabled; and $13 million in grants for college students.

Even if a budget agreement is reached by the end of this month, tax refunds and other payments could remain temporarily frozen. Chiang said a budget deal may not generate cash quickly enough to resume them immediately.

Not all payments will stop Feb. 1. Most school and healthcare programs will be paid, as required by state and federal law. The state will continue to pay more than $6.6 billion in such bills.

And Los Angeles County officials said they would cover welfare payments to more than 500,000 local recipients — for now.

But California is projected to be $346 million short of the funds it needs to pay all its bills in February. By March, the state would be so far in the red that even continuing to suspend payments would not cover the shortfall. California would be insolvent, making the issuance of IOUs likely.

State officials have already designed an IOU template, Chiang said, and have been negotiating with banks over whether taxpayers could cash or deposit them if they are issued. The state could be forced to pay as much as 5% interest on delayed tax refunds if they are not paid by the end of May, Chiang said.

The last time the state issued such IOUs — the only time since the Great Depression — was in 1992.

The suspension of payments is the latest radical move by officials to help keep the state from running out of cash as Gov. Arnold Schwarzenegger and the Legislature battle over how to avoid insolvency.

Schwarzenegger, who hopes to speed up public-works projects to stimulate the economy, wants tax increases, spending cuts and legislation to relax some environmental rules and allow private companies to do some government construction.

Democrats are seeking tax increases as well, but fewer spending cuts. Republican lawmakers would only pare spending and have been blocking any tax hikes.

Meanwhile, Schwarzenegger has ordered that most state workers take two days off per month without pay — equivalent to about a 10% pay cut. The governor also ordered most state offices — including all DMV field offices — to close on those two days. The order is being challenged in court by labor unions.

The state has also halted payments of bond money for more than 5,300 public-works projects.

On Friday, the state Department of Finance temporarily exempted 276 of the projects from the freeze, reasoning that because they are nearly complete, it could cost the state more to shut them down than to finish them.

The exemption, through Feb. 1, will allow the continuation of school construction by the Inglewood Unified School District and the construction of a new Court of Appeal facility in Santa Ana. Work on new rail tracks at L.A.’s Union Station and road projects involving Irwindale Avenue, Martin Luther King Boulevard and Imperial Highway in Los Angeles County will also be able to continue.

Some projects were exempted because the state is under court order to do the jobs. Others would threaten public safety if left uncompleted, according to Mike Genest, Schwarzenegger’s finance director.

“We’re going to take the risk of allowing them to continue a little longer because we are very hopeful will have a budget by Feb. 1,” Genest said.

Contractors lined up at a meeting of state finance officials to warn of the consequences of stopping the bulk of the public-works money. They said shutting down projects already underway would ultimately cost the state significantly. According to Caltrans Director Will Kempton, the state would have to pay $350 million in legal costs, claims for contract breaches and expenses for securing sites that go dormant.

“The bulk of those dollars are lost . . . to the taxpayers,” Kempton said. “You can’t just walk away from a construction project. You have to make sure it is buttoned up.”

It is not just the state that would take a hit. Some school districts relying on state funds do not have the reserves in place to cover the payments they will owe builders if work stops.

Counties are also feeling the pinch. They process the welfare payments scheduled to be halted by the controller’s office Feb. 1. The state is freezing those payments, along with millions of dollars in salaries to county workers who run the programs.

Some county officials say they don’t have reserves in place to cover the state until the budget crisis is resolved.

“We simply don’t have the cash,” said Pat Leary, assistant administrator for Yolo County. “We are in critically bad times.”

About a third of all state welfare payments go to Los Angeles County, where officials said they can shift money around to keep the payments flowing in the short term.

“The million-dollar question is how long this will last,” said L.A. County Chief Executive William T Fujioka. “We cannot sustain a huge and very long hit.”