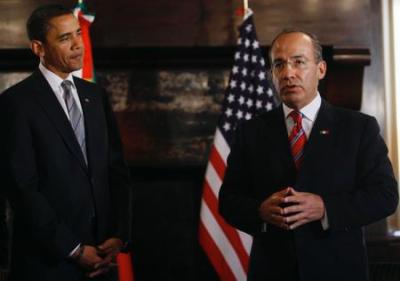 President-elect Barack Obama listens as Mexico’s President Felipe Calderon makes a statement to reporters in Washington, Monday, Jan. 12, 2009. Mexico is one of two countries that “bear consideration for a rapid and sudden collapse,” according to a report by the U.S. Joint Forces Command on worldwide security threats. (AP photo)

EL PASO – Mexico is one of two countries that “bear consideration for a rapid and sudden collapse,” according to a report by the U.S. Joint Forces Command on worldwide security threats.

The command’s “Joint Operating Environment (JOE 2008)” report, which contains projections of global threats and potential next wars, puts Pakistan on the same level as Mexico. “In terms of worse-case scenarios for the Joint Force and indeed the world, two large and important states bear consideration for a rapid and sudden collapse: Pakistan and Mexico.

“The Mexican possibility may seem less likely, but the government, its politicians, police and judicial infrastructure are all under sustained assault and press by criminal gangs and drug cartels. How that internal conflict turns out over the next several years will have a major impact on the stability of the Mexican state. Any descent by Mexico into chaos would demand an American response based on the serious implications for homeland security alone.”

The U.S. Joint Forces Command, based in Norfolk, Va., is one of the Defense Departments combat commands that includes members of the different military service branches, active and reserves, as well as civilian and contract employees. One of its key roles is to help transform the U.S. military’s capabilities.

In the foreword, Marine Gen. J.N. Mattis, the USJFC commander, said “Predictions about the future are always risky … Regardless, if we do not try to forecast the future, there is no doubt that we will be caught off guard as we strive to protect this experiment in democracy that we call America.”

The report is one in a series focusing on Mexico’s internal security problems, mostly stemming from drug violence and drug corruption. In recent weeks, the Department of Homeland Security and former U.S. drug czar Barry McCaffrey issued similar alerts about Mexico.

Despite such reports, El Pasoan Veronica Callaghan, a border business leader, said she keeps running into people in the region who “are in denial about what is happening in Mexico.”

The U.S. military report, which also analyzed economic situations in other countries, also noted that China has increased its influence in places where oil fields are present.

More stories on the violence in Mexico

Diana Washington Valdez may be reached at dvaldez@elpasotimes.com; 546-6140.