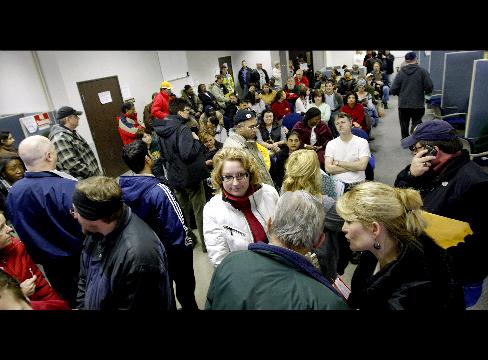 Job seekers wait in line to speak with agents at Michigan’s Unemployment Insurance Agency Problem Resolution office in Livonia, Michigan, on Jan. 9, 2009. The U.S. lost more jobs in 2008 than in any year since 1945 as employers fired another 524,000 people in December, indicating a free-fall in the economy. Photographer: Jeff Kowalsky/Bloomberg News

Jan. 9 (Bloomberg) — The U.S. lost more jobs in 2008 than in any year since 1945 as employers fired another 524,000 people in December, indicating a free-fall in the economy just days before President-elect Barack Obama takes office.

“Consumers are now going to get more and more scared at the prospect of losing their job,” said Nariman Behravesh, chief economist at IHS Global Insight in Lexington, Massachusetts. Obama’s proposed fiscal stimulus “needs to be big, needs to be bold, needs to be swift. If they can do something quickly we can limit the hemorrhage by mid-year.”

The Labor Department reported that the nation lost 2.589 million jobs in 2008, just shy of the 2.75 million decline at the end of World War II. The unemployment rate climbed more than economists forecast, to 7.2 percent in December, the highest level in almost 16 years.

Today’s figures will intensify pressure on U.S. lawmakers to act quickly on Obama’s recovery program, which may exceed $775 billion and aims to save or create 3 million jobs. They also underscore the urgency of the Federal Reserve’s $200 billion initiative to restart consumer financing markets that’s scheduled to begin next month.

The outlook for jobs this year is no brighter as retailers from Wal-Mart Stores Inc. to Macy’s Inc. slash profit forecasts and manufacturers including Alcoa Inc. cut output and staff.

Stocks fell, extending the market’s worst weekly loss since November, and Treasury securities gained, on concern the recession was worsening. The Standard & Poor’s 500 Stock Index fell 2.1 percent to close at 890.35. Benchmark 10-year note yields were at 2.38 percent at 4:21 p.m. in New York.

Payrolls were forecast to drop 525,000 after a previously reported 533,000 decline in November, according to the median estimate of 73 economists surveyed by Bloomberg News. Revisions subtracted 154,000 from payroll figures previously reported for November and October.

The jobless rate was projected to jump to 7 percent from a previously reported 6.7 percent in November.

“This was the most rapid deterioration in the labor market over a six-month period since 1975,” said Michael Darda, chief economist at MKM Partners LP in Greenwich, Connecticut. “Policy makers will go full throttle” until “the labor market starts to turn,” he said.

Obama is pressing for a stimulus plan including tax cuts and spending on everything from roads and schools to the energy network, to help pull the world’s largest economy out of a slump that’s in its second year.

“This morning we received a stark reminder about how urgently action is needed,” Obama said at a press briefing today in Washington, referring to the payrolls report. “What we can’t do is drag this out when we just saw half a million more jobs lost,” he said, adding that he will “make sure that Congress stays focused in the weeks to come” to pass the stimulus bill.

Fed policy makers are planning to start a new program next month aimed at shoring up the market for financing car purchases, credit card loans and student debt. Officials announced the effort in November at the same time as initiating a $600 billion program to purchase debt issued or backed by government-chartered housing finance companies.

The central bank has already lowered its benchmark interest rate to zero to 0.25 percent, aiming to bring down borrowing costs. Officials’ main focus is now taking unorthodox steps termed by analysts as quantitative easing to boost the supply of credit in the economy.

“For policy makers, there is a message” in today’s figures, said Kurt Karl, chief U.S. economist at Swiss Re in New York. “It obviously gives a big boost to Obama’s quite large stimulus package. The Fed will continue to do quantitative easing with rates so low.”

With today’s report, the Labor Department revised figures from its household survey, which includes the unemployment rate, going back five years. Benchmark revisions to the payroll figures will be announced in February.

Last month’s decline was the 12th consecutive drop in payrolls. The economy created 1.1 million jobs in 2007.

During President George W. Bush’s two terms in office, the economy generated a net 3 million jobs, compared with 22.8 million created during the eight years when Bill Clinton was president.

Bush leaves office with unemployment at 7.2 percent, compared with the 4.2 percent rate he inherited from Clinton in January 2001. Unemployment was 7.3 percent when Clinton took office in January 1993, the last month that the jobless rate was higher than now.

Workers’ average hourly wages rose 5 cents, or 0.3 percent, to $18.36 from the prior month. Hourly earnings were 3.7 percent higher than December 2007. Economists surveyed by Bloomberg had forecast a 0.2 percent increase from November and a 3.6 percent gain for the 12-month period.

Today’s report showed factory payrolls shrank 149,000, the biggest drop since August 2001. Economists had forecast a drop of 100,000. The decrease included a loss of 21,400 jobs in auto and parts industries. Manufacturing, which makes up 12 percent of the economy, shrank in December at the fastest pace in 28 years, Institute for Supply Management figures showed.

Analysts said the economy may be in danger of a reinforcing cycle of rising unemployment and declining household spending, what policy makers call a negative feedback loop, which is difficult to snap once it’s begun.

Fed staff last month cut projections for gross domestic product and the job market, stating the unemployment rate was “likely to rise significantly into 2010,” according to minutes of policy makers’ December meeting.

Sales at stores open at least a year dropped 2.2 percent in the last two month months of 2008, the biggest holiday-season decline since the International Council of Shopping Centers started keeping records in 1970, the group said yesterday.

“These are extraordinary times, requiring speed and decisiveness to address the current economic downturn,” Klaus Kleinfeld, chief executive officer of Alcoa, said in a Jan. 6 statement announcing 13,500 job cuts worldwide. The world’s largest aluminum producer said it will trim an additional 1,700 contractor positions and froze hiring and salaries in some areas.

Some companies have taken other steps to lower costs. Caterpillar Inc., the world’s largest maker of construction equipment, will put 814 workers on an “indefinite” layoff, shipper FedEx Corp. cut the pay of Chief Executive Officer Fred Smith and other employees, and auto-parts supplier Visteon Corp. said it will trim the workweek and some salaries.

To contact the reporter on this story: Shobhana Chandra in Washington schandra1@bloomberg.net