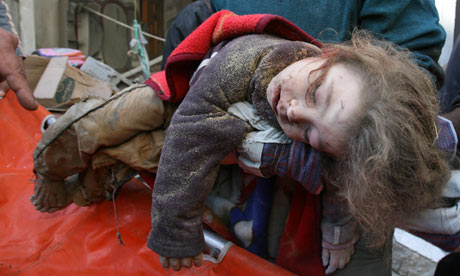 The body of a girl who was found in the rubble of her destroyed house following an Israeli air strike on a house in Zeitoun Photograph: Mohammed Abed/AFP/Getty Images

At least 30 people were killed in the Zeitoun district of Gaza after Israeli troops repeatedly shelled a house to which more than 100 Palestinians had been evacuated by the Israeli military, the UN said today.

The UN Office for the Coordination of Humanitarian Affairs (OCHA), said it was “one of the gravest incidents since the beginning of operations” against Hamas militants in Gaza by the Israeli military on 27 December.

OCHA said the incident took place on 4 January, a day after Israel began its ground offensive in Gaza.

According to testimonies gathered by the UN, Israeli soldiers evacuated around 110 Palestinians to a single-storey house in Zeitoun, south-east Gaza. The evacuees were instructed to stay indoors for their own safety but 24 hours later the Israeli army shelled the house with rockets. Around half the Palestinians sheltering in the house were children, OCHA said.

The OCHA report does not accuse Israel of a deliberate act but calls for an investigation.

Among the dead were six members of the Samouni family; a picture of three of the family’s children in blood-stained clothing laid on a morgue floor and in front of their grieving father were shown in the Guardian on Tuesday. The father, Wael Samouni, said dozens of people had been sheltering in the house after Israeli troops ordered them and neighbours to stay inside.

The UN said there had been extensive destruction in Zeitoun. For three days, from 3-7 January, the Israeli Defence Force prevented Red Cross medical teams from entering the area to evacuate the wounded.

“Those who survived and were able walked two kilometres to Salah Ed Din road before being transported to the hospital in civilian vehicles,” the UN said.

More than 40 Palestinians were killed after missiles exploded outside a UN school that had been sheltering hundreds of people in the Jabaliya refugeee camp, despite the UN saying the school was clearly marked with a UN flag and its position reported to Israeli military.

More than 750 Palestinians have died since the Israeli military operation began. Around 42% of the casualties have been children, according to the Palestinian ministry of health. More than half of Gaza’s population are children.