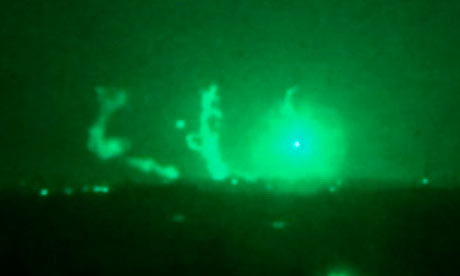 Israeli tanks and troops have launched a ground invasion to reoccupy parts of the northern Gaza strip as the military escalated its assault on the Palestinian enclave in an attempt to curb Hamas rocket attacks on Israel.

With Israel’s chief military spokesman warning that the attack would take “many long days”, the Israeli Cabinet also authorised the call of thousands more reservists. As Israeli tanks and infantry crossed into northern Gaza reports began to emerge of fighting between Hamas and Israeli troops. The invasion comes after Hamas warned Israeli forces entering Gaza faced a “black destiny” and vowed that they would be defeated.

Palestinian witnesses said a small column of military vehicles moved across the border firing tracer bullets after dark. The Israeli army said the assault is intended to take control of territory in the north of the Gaza strip from where Hamas fires its rockets.

“The objective is to destroy the Hamas terror infrastructure in the area of operations,” said a spokeswoman, Major Avital Leibovitch. “We are going to take some of the launch areas used by Hamas.”

However, Israel said this is not the start of a reoccupation of Gaza.

Hours earlier, an intense Israeli artillery assault along the border, apparently intended to drive away enemy forces and clear mines or roadside bombs, cleared the way for the incursion.

The ground offensive followed a day of heavy air, sea and artillery bombardment of Gaza that left at least 11 people, including children, dead and dozens wounded when an Israeli missile strike hit a mosque in Beit Lahiya as worshippers were praying inside.

The death toll, as the Israeli assault on Gaza entered its second week, rose to about 450 Palestinians, about one third of them civilians or policemen, with four Israelis killed by Hamas rocket fire.

As diplomatic pressure for a truce gained momentum, the exiled leader of Hamas, Khaled Meshaal, rejected a ceasefire in Gaza until Israel agrees to end its three-year blockade of the territory which has caused economic collapse and widespread hardship.

The latest of more than 700 Israeli aircraft strikes over the past week also killed another senior Hamas official, Abu Zakaria al-Jamal, a leader of its armed wing.

Israeli forces attacked the American school in Gaza, killing a guard. The Israeli military said the school, which has no links to the US government, was being used to store Hamas weapons and to shelter its fighters.

But the continued Israeli assault did not stop Hamas from firing rockets. Fifteen hit Israel yesterday, one of which lightly wounded two people when it hit an eight-storey building in Ashdod. Another rocket struck an empty house in Ashkelon, setting it on fire.

As diplomatic efforts continued to reestablish the ceasefire between Israel and Hamas that collapsed last month, Meshaal said in a televised address that the organisation had been contacted by European and Arab countries about a truce.

Egypt says it has begun exploratory talks with Hamas.

President George Bush said in his weekly radio address that Hamas must take the initiative to end the fighting by halting its rocket fire into Israel.

“Another one-way ceasefire that leads to rocket attacks on Israel is not acceptable,” he said. “There must be monitoring mechanisms in place to help ensure the smuggling of weapons to terrorist groups in Gaza comes to an end… I urge all parties to pressure Hamas to turn away from terror and to support legitimate Palestinian leaders working for peace.”

But Meshaal said Hamas would not agree to a truce until Israel stops its attacks and lifts the blockade of Gaza.

“Our demand is clear – that aggression should end immediately. The siege must be ended and the crossings must all be opened,” he said. “We will not break, we will not surrender or give in to your conditions.”

Meshaal also warned that the organisation would fight an Israeli ground assault if it comes.

“We are ready for the challenge: this battle was imposed on us and we are confident we will achieve victory because we have made our preparations,” he said.

Meshaal said Hamas will attempt to capture Israeli combatants and hold them prisoner alongside Gilad Shalit, the soldier who was snatched from his armoured vehicle and taken in to Gaza in June 2006. “If you commit a foolish act by raiding Gaza, who knows – we may have a second or a third or a fourth Shalit,” Meshaal said.

A ground offensive carries great risks for the Israeli military and the country’s political leaders, particularly the defence minister and Labour party leader, Ehud Barak. His support in the polls in the run-up to next month’s general election has risen sharply over his handling of the assault on Gaza. But if Israeli military casualties were to rise sharply, or soldiers were to be captured, as Meshaal threatens, public support for the war is likely to ebb away.

Still, Barak and the prime minister, Ehud Olmert, may feel they have little choice but to escalate if the air bombardment continues to fail to stop Hamas rocket fire. The pressure for more action is likely to intensify further if there are more Israeli civilian deaths.

Meanwhile, the head of the Arab league, Amr Moussa, said he was astonished at claims by the Israeli foreign minister, Tzipi Livni, that there is no humanitarian crisis in the densely populated Gaza strip.

“There may be those that sympathise with such a remark. This is something we must condemn, and we must say there is a major humanitarian crisis.”

The UN said there is growing shortages of basic foodstuffs and fresh water because of damage to the infrastructure. The main power plant has shut down. Fuel for cooking is no longer available.