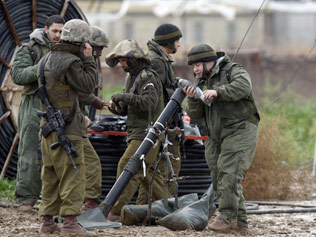 DEBKAfile‘s Washington source report that in a telephone conversation with prime minister Ehud Olmert, US president George W. Bush okayed Israeli air, sea and ground operations against Hamas in the Gaza Strip. He promised the US would veto a resolution condemning Israel at the UN Security Council meeting next Monday. Early Saturday morning, Jan. 3, Day 8 of Israel’s Gaza operation, US and British media described the Israeli invasion as hours away.

In his weekly radio address – brought forward by a day, the US president spoke with exceptional firmness: “Another one-way ceasefire that leads to rocket attacks on Israel is not acceptable,” he said. “This recent outburst of violence was instigated by Hamas – a Palestinian terrorist group supported by Iran and Syria that calls for Israel’s destruction.”

He noted that “Hamas took over the Gaza Strip in a coup and routinely violated an Egyptian-brokered ceasefire…” and went on to define the exit point for Israel’s military operation:

“Promises from Hamas will not suffice,” he said. There must be “monitoring mechanisms in place to help ensure that smuggling of weapons to terrorist groups in Gaza comes to an end.”

This left Israel the option of sustaining its military activity against Hamas until such a mechanism was installed. He implicitly criticized Egypt for failing to control the smuggling of rockets and other munitions through its territory.

In his radio address, President Bush noted that president-elect Barack Obama is being kept up to date on the latest developments. With just over two weeks left in power, the Bush administration is preparing to hand over the problem to his successor.

2. Hamas’ conduct Friday: After 9 Grad Katyusha rockets were fired against Ashkelon, destroying two buildings and injuring five Israelis, the tempo slowed to 40 launchings the whole day – half the week’s daily average. The Palestinian terrorists were evidently reserving stocks for a grand climax when Israeli tank and armored infantry crossed into Gaza.

3. Hamas threats have mounted to a new pitch: Damascus-based Khaled Meshaal, who is in hiding, warned Israel (in a taped speech) of a “black fate” if it invades Gaza, including more kidnapped Israeli soldiers. Underlying his words was the threat of guerrilla action behind Israeli lines to snatch hostages.

4. Israeli air strikes against the empty homes of Hamas leaders continued early Saturday after 45 were destroyed Thursday and Friday. Their objective is to demoralize the Hamas command echelon and break its will to fight.

5. The Hamas military wing reported thwarting an Israeli special forces’ attempt to steal into the Sejaya refugee camp in Gaza City early Saturday. This is the third such claim in three days. The IDF spokesman denied knowledge of the incident.

6. DEBKAfile‘s military sources report mass-desertions by teenagers who form the backbone of Hamas’ fighting rank and file. They are going home to their parents.

7. Early signs that former Palestinian security officers unaffiliated with Hamas are getting together to seize control of Gazan districts in which Hamas rule has collapsed.

Israeli warplanes dropped leaflets from Friday night advising people living in the northern and eastern neighborhoods of Gaza City to leave their homes. Defiance of this curfew directive carried the risk of being shot.

8. Cairo forwarded an urgent request to Hamas leaders in Damascus to make known their conditions for a ceasefire.

9. The arrival in Damascus of the chairman of Iran’s national security council and nuclear negotiator Said Jalili for urgent talks with Syrian president Bashar Assad and the leaders of Hamas and Jihad Islami.

Bush’s speech followed his conversations with Palestinian, Egyptian, Jordanian and Saudi leaders as well as Olmert. He said he was concerned by the humanitarian situation in Gaza and noted that “Hamas terrorists often hide within the civilian population which puts innocent Palestinians at risk.”