Compare a modern soccer and baseball stadium to the Colosseum. Nothing has really changed. The entire society is built around ‘Panem et circenses’ (‘Bread and Circuses’ or ‘Bread and Games’)…and religion.

If an expert puts electrodes at certain places to your head and measures your brain waves – modified EEG using the Fourier-Transformation – this facts can be proven.

Not even a Faraday cage is safe because they are also using scalar waves that cannot be shielded.

In order to keep you frozen like a rabbit in front of a snake the elite uses to this day ‘Divide et impera’ (‘Divide and Rule’ or ‘Divide and Conquer’).

Gladiators are set to make a return to the ancient Colosseum in Rome for the first time in 2,000 years.

Council officials say the proposed plan would not be a ‘carnival’ but a very serious affair. 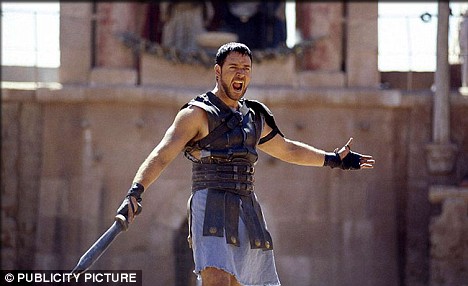 Umberto Broccoli, Rome’s archaeology councillor and TV presenter, said: ‘We need to bring museums alive and speak to the public. We will recreate the atmosphere as it was then.’

Mr Broccoli added: ‘We need to recreate the sights, smells and sounds that were there at the time on the streets.

‘This is the only way to create an atmosphere in a museum that will not be forgotten in a hurry.’

Rome has several modern day gladiator schools were ‘students’ can train as a real life Russell Crowe and pretend to be his hero character Maximus.

Whether Russell Crowe himself could be tempted to make an appearance remains to be seen. 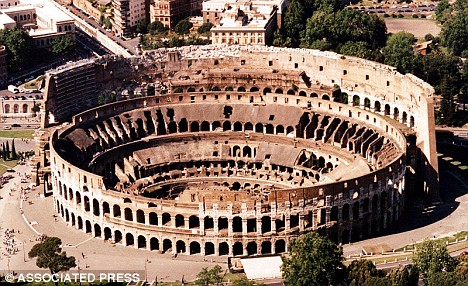 Ready for action again: The Colosseum in Italy will see gladiator fights for the first time in 2,000 years

Mr Broccoli added that the proposal would not be tacky – although it had not yet been established whether the mock fights would take place on a purpose-built stage in the centre of the arena or outside.

He said the gladiators would wear original costumes and they would use the same techniques and methods as the sporting heroes of ancient Rome.

And he insisted it would not be ‘some form of Disneyland’.

Mr Broccoli said: ‘We need to ensure that museums are not simply thought of as places where old things are kept and where things are often badly explained.

He suggested that as the gladiators staged their battles, visitors would hear descriptions by Lucius Anneous Seneca, the first century philosopher and statesman and who was also an aide to mad Roman emperor Nero.

Sergio Iacomoni, who has run a gladiator school in Rome since 1994, said: ‘We have 200 students and are more than willing to take part in this. This is a real passion for us.’