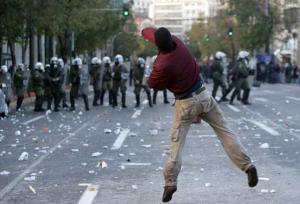 Protesters clash with police in Athens on Thursday

Europe exists, it appears. If Greek students sneeze, or catch a whiff of tear-gas, young people take to the streets in France and now Sweden. Yesterday, masked youths threw two firebombs at the French Institute in Athens. Windows were smashed but the building was not seriously damaged. Then youths spray-painted two slogans on the building. One said, “Spark in Athens. Fire in Paris. Insurrection is coming”. The other read, “France, Greece, uprising everywhere”.

It was a calculated and violent attempt to link disparate youth protest movements. Links between protests in Greece and France – and, to a lesser degree, unrest in Sweden – may seem tenuous, even non-existent. But social and political ailments and their symptoms transmit as rapidly as influenza in the television, internet and text-message age.

With Europe, and the world, pitching headlong into a deep recession, the “Greek Syndrome”, as one French official calls it, was already being monitored with great care across the European Union. The attempt to politicise and link the disputes across EU frontiers may prove to be a random act of self-dramatisation by an isolated group on the Greek far left. But it does draw attention to the similarities – and many differences – between the simultaneous outbreaks of unrest in three EU countries.

Thousands of young Greeks have been rioting on and off for almost two weeks. They are protesting against the chaotic, and often corrupt, social and political system of a country still torn between European “modernity” and a muddled Balkan past. They can be said, in that sense, to be truly revolting.

The riots began with a mostly “anarchist” protest against the killing of a 15-year-old boy by police but spread to other left-wing groups, immigrants and at times, it seemed, almost every urban Greek aged between 18 and 30. The protesters claim that they belong to a sacrificed “€600” generation, doomed to work forever for low monthly salaries. French lycée (sixth-form) students took to the street in their tens of thousands this week and last to protest against modest, proposed changes in the school system and the “natural wastage” of a handful of teaching posts. In other words, they were engaged in a typical French revolution of modern times: a conservative-left-wing revolt, not for change but against it. The lycée students are, broadly, in favour of the status quo in schools, although they admit the cumbersome French education system does not serve them well.

But behind the unrest lie three other factors: a deep disaffection from the French political system; a hostility to capitalism and “globalism” and the ever-simmering unrest in the poor, multiracial suburbs of French cities.

In Malmo on Thursday night, young people threw stones at police and set fire to cars and rubbish bins. This appears to have been mostly a local revolt by disaffected immigrant and second-generation immigrant youths, joined by leftist white youths, against the closure of an Islamic cultural centre. As in Greece and France, the Swedish authorities believe the troubles have been encouraged, and magnified, by political forces of the far left.

There may be little direct connection between the events in the three countries but they were already connected in the minds of EU governments before yesterday’s attack on the French cultural institute. The French President, Nicolas Sarkozy, forced his education minister, Xavier Darcos, to delay, then abandon his planned reform of the lycée system this week. Why the change? Largely because of the events in Greece, French officials say. There was a heated debate in the Elysée Palace last weekend. One faction of advisers and ministers wanted to push ahead with the school reforms (already much watered down). Another faction was disturbed at signs that the lycée protests, although relatively limited, were spinning out of control.

The student leaders were no longer in charge of their troops, they said. Violent elements were joining the marches from the poor, multi-racial suburbs. Far left and anarchist agitators were said to be getting involved. With the Greek riots on the TV every night, and the French economy heading into freefall, the officials feared the lycée protests could spark something much wider and more violent.

President Sarkozy agreed to give way. The lycée protests went ahead anyway. There were more students on the streets of French cities on Thursday, after the government backed down, than there were last week when the education minister insisted that he would press ahead. A few cars were burnt and overturned in Lyons and Lille and a score of protesters were arrested but the marches were mostly peaceful.

Students interviewed on the streets of Paris refused to accept that the reforms had been withdrawn. President Sarkozy was not in control, they said. He was “under orders from Brussels and Washington”. The real motive was to take money out of the French education budget to “refloat the banks”.

The Greek, French and Swedish protests do have common characteristics: a contempt for governments and business institutions, deepened by the greed-fired meltdown of the banks; a loose, uneasy alliance between mostly, white left-wing students and young second-generation immigrants; the sense of being part of a “sacrificed generation”.