Pakistan warned it is ready for war with India if it is attacked following the strike by the Mumbai terrorists. 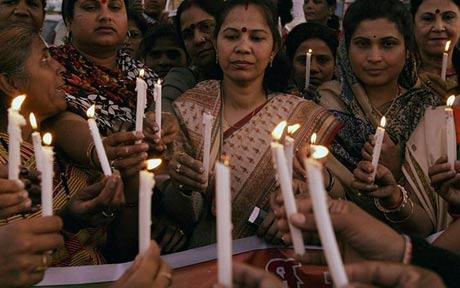 A peace vigil in honour of those who died in the Mumbai attacks is held in the Indian city of Bhopal Photo: Reuters

The remarks by Pakistan’s foreign minister, Shah Mehmood Qureshi, who also insisted he would not hand over any suspects in the Mumbai attacks, come amid mounting tensions between the nuclear-armed neighbours.

India has said it is keeping all options open following last month’s carnage by the Mumbai terrorists, who killed more than 170 people.

“We do not want to impose war, but we are fully prepared in case war is imposed on us,” said Mr Qureshi.

“We are not oblivious to our responsibilities to defend our homeland. But it is our desire that there should be no war.”

Indian officials say the hardline Lashkar-e-Taiba (LeT) group, which is based in Pakistan despite being banned by the government, is behind the bloodshed, and Indian media have suggested there could be Indian strikes on militant camps.

Mr Qureshi said he was sending “a very clear message” that his country did not want conflict with India.

“We want friendship, we want peace and we want stability – but our desire for peace should not be considered Pakistan’s weakness.”

The minister also said that India’s demands for the extradition of suspects in the Mumbai attacks were out of the question and that Pakistan, which has arrested 16 people since Saturday, would keep them on home soil.

“The arrests are being made for our own investigations. Even if allegations are proved against any suspect, he will not be handed over to India,” Qureshi said. “We will proceed against those arrested under Pakistani laws.”

India and Pakistan have fought three wars since independence from Britain and nearly came to a fourth in 2001 after an attack on the Indian parliament that was blamed on LeT.

Under international pressure to act, Pakistan raided a camp run by a charity, Jamaat-ud-Dawa, that many believe has close links to LeT, and arrested 15 people.

The authorities are questioning Zaki-ur-Rehman Lakhvi, the alleged mastermind of the Mumbai attacks, who was among those arrested at the weekend.