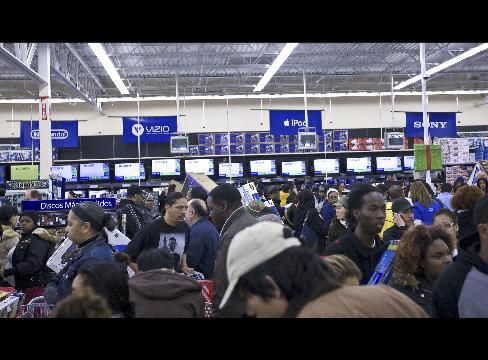 J.C. Penney Co., Nordstrom Inc. and Gap Inc. all reported sales drops of 10 percent or more at stores open at least a year. The decreases were less than some analysts estimated after 50 percent-off discounts lured customers grappling with the U.S. recession. Wal-Mart Stores Inc. posted a 3.4 percent gain, beating its forecast.

Declines in consumer spending in October persisted into the first part of November before rebounding after the Thanksgiving Day holiday. Retailers may need to keep promoting half-off markdowns over the next three weeks to attract customers, even though such sales erode margins during a period when they make a third or more of their annual profit.

“The promotions are pretty much across the board in retail, and some are the biggest you’ve seen in years,” said David Abella, a portfolio manager at Rochdale Investment Management LLC in New York, with $2 billion in assets including Wal-Mart shares. “They will need to keep that up through December to draw traffic and sales.”

Even with the Black Friday discounts, November same-store sales fell 2.7 percent, the International Council of Shopping Centers said, based on a survey of 37 chains. That’s the biggest drop since the ICSC began tracking data in 1969. Excluding Wal- Mart, sales plunged 7.7 percent.

The day after Thanksgiving is called Black Friday because retailers were said to turn a profit for the year on increased holiday sales.

“The news out of Costco and Wal-Mart wasn’t really that bad,” Jessica Hoversen, a foreign-exchange and fixed-income analyst at MF Global Ltd. in Chicago, said in a Bloomberg Television interview. “That’s definitely a positive, and Black Friday sales weren’t as bad as everyone thought they would be.”

Purchases during the final two months of the year may fall as much as 1 percent, the New York-based ICSC said, worse than its forecast of a 1 percent gain.

The later Thanksgiving holiday in 2008 compared with last year means five fewer shopping days before Christmas and one less week of holiday shopping in November than in 2007. This calendar shift reduced same-store sales by as much as 2 percent, the ICSC said. The shift may push more sales into December, according to Retail Metrics.

Sales were “abysmal” the first three weeks of November, according to Craig Johnson, president of Customer Growth Partners LLC, a retail consulting firm.

The number of people on unemployment benefit rolls rose to 4.09 million in the week ended Nov. 22, the most since December 1982, the Labor Department said today. The jobless rate probably increased to 6.8 percent last month, the highest level since 1993, the median estimate in a Bloomberg News survey showed.

The comparable-store sales gain by Wal-Mart beat the world’s largest retailer’s forecast for a 1 percent to 3 percent increase and the average analyst estimate of 2 percent, according to Swampscott, Massachusetts-based Retail Metrics.

“Wal-Mart’s pricing message was just overwhelming on Black Friday, it was all about value,” said Sarah Henry, a retail analyst with MFC Global Investment Management.

Costco, the largest U.S. warehouse-club chain, trailed projections of a 1.3 percent drop. Comparable-store sales are considered by some investors to be the best measure of retail health because they exclude the effect of location openings and closings in the past year.

“Results from post-Thanksgiving holiday sales, particularly Friday, were stronger than the rest of the month, but were insufficient to offset earlier weakness,” Target Chief Executive Officer Gregg Steinhafel said in a statement.

December sales may see a lull until the week before Christmas, said Henry.

“People are waiting for the deeper discounts,” said Johnson, based in New Canaan, Connecticut. “They are keeping their powder dry, waiting to see what is happening with the economy and possibly their own jobs.”

To contact the reporter on this story: Heather Burke in New York at hburke2@bloomberg.net.