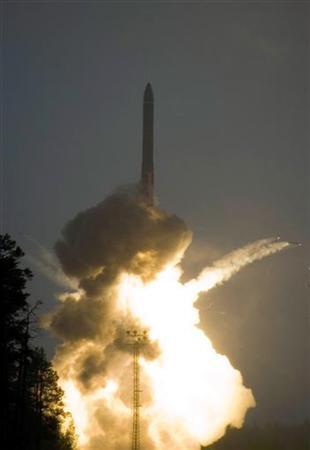 Russia’s relations with Washington this year hit their lowest ebb since the 1991 collapse of the Soviet Union after a row over the war against U.S. ally Georgia and Moscow’s recognition of two Georgian rebel regions as independent states.

Kremlin officials say the U.S. has failed to listen to their concerns about the missile shield, which Washington says is needed to protect against “rogue states” such as Iran.

Russia test fired one of the RS-24 missiles on November 26, the third such test in two years.

Russian generals say the RS-24 can pierce any anti-missile system. It can be armed with up to 10 different warheads and is intended to replace Russia’s earlier generation intercontinental missiles such as the RS-18 and RS-20.

Solovtsov said the global financial crisis probably would impose some limits on funding, although he said Russia would test 13 missiles next year, almost double the seven tests this year, Interfax reported.

“Due to the world financial crisis, certain resource restrictions will be applied but still the (missile) force should be able to fulfill its duties,” he was quoted as saying.

Civilian personnel in Russia’s military forces also will be cut by 150,000 to 600,000 as part of ongoing reforms to defense structures, Interfax separately reported, quoting a source in Russia’s Defense Ministry.