Senator Hillary Clinton has accepted Barack Obama’s offer to become US Secretary of State, as the president-elect moved at rapid speed to assemble an all-star cabinet amid steep challenges at home and overseas. 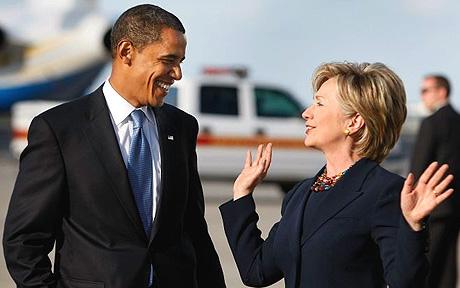 Mrs Clinton, 61, had been uncertain if she should give up her Senate seat to join Barack Obama’s staff Photo: GETTY

Friends of the former First Lady told American news organisations that she had firmly decided to give up her seat as a senator for New York and become the international face of the man who thwarted her presidential ambitions in a long and sometimes bitter battle for the Democratic Party’s nomination.

Other reports said Mr Obama will nominate Timothy Geithner, 47, as his Treasury Secretary. As head of the New York federal reserve bank he has been involved with the $700 billion bail-out of Wall Street, which he will take charge of if confirmed.

As a former treasury official, Mr Geithner has invaluable Washington experience and will be considered a wise choice. Stocks soared as news of his appointment reached Wall Street.

He will probably be joined around the cabinet table by Bill Richardson, the New Mexico governor, who has been reportedly selected as commerce secretary after losing out to Mrs Clinton as secretary of state, the most prestigious job beneath the presidency.

With Mr Obama likely to name his economic team in full within a few days, and Mrs Clinton’s decision clearing the way for other foreign policy posts to be filled, he is set to complete many of the most important slots in his administration at uncommonly early stage.

His choices for the positions of health secretary, attorney general and homeland security are Tom Daschle, Eric Holder, and Janet Napolitano, respectively, though they remain subject to approval by his vetting team.

Though news about some appointments has leaked out, to the frustration of the Obama camp, his transition from winning candidate to president is proceeding at a pace and with a smoothness that has impressed political observers.

Mr Obama and his aides have understood that with the financial markets very jittery and economic confidence subsiding a calm and orderly changeover was paramount.

His administration will feature veterans of the Bill Clinton administration and politicians rewarded for their early support of during the primaries, such as Mr Richardson, Janet Napolitano, the Arizona governor tipped to become head the Homeland Security Department and Tom Daschle, who will run health.

His recruitment of Mrs Clinton in particular honours Mr Obama’s pledge to appoint an all-star cabinet, or a “team of rivals”, of strong personalities who will speak their minds and provide contrasting views.

But some have criticised her management skills – her new department has 19,000 employees – and questioned her foreign policy experience at a time when the country is conducting wars in Iraq and Afghanistan and facing growing pressure from Russia, Iran and China.

Obama supporters have also raised concerns that a politician with such a large power base would happily follow anyone else’s orders. Some have been unable to forgive Mrs Clinton for her strong criticism of Mr Obama during the primaries, when she launched an advertisement questioning whether the nation would want such an inexperienced politician answering the White House hotline at 3am.

Mrs Clinton, 61, evidently had her own doubts, and was uncertain if she should give up her Senate seat from heavily Democratic New York, which she could most likely have occupied for the rest of her career.

The only hesitation about her within the Obama camp was removed after Mr Clinton co-operated fully with the vetting team’s investigation of his network of overseas donors to his global charity.

The former president is understood to have promised not to conduct speaking engagements or seek funds from sources that might present a conflict of interest with the foreign policy his wife would be pursuing.