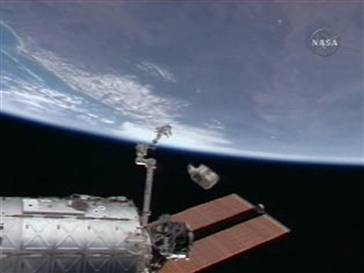 “This has got a very low likelihood that anybody will be impacted by it,” said Mike Suffredini, NASA’s space station program manager, in an interview. “But still, it is a large object and pieces will enter and we just need to be cautious.” NASA astronaut Clayton Anderson threw the ammonia tank from the tip of the space station’s Canadian-built robotic arm during a July 23, 2007, spacewalk. He tossed away an unneeded video camera stand overboard as well, but that 212-pound (96-kilogram) item burned up harmlessly in the atmosphere early this year, Suffredini said.

NASA expects up to 15 pieces of the tank to survive the searing hot temperatures of re-entry, ranging in size from about 1.4 ounces (40 grams) to nearly 40 pounds (17.5 kilograms).

If they reach all the way to land, the largest pieces could slam into the Earth’s surface at about 100 mph (161 kilometers per hour). But a splashdown at sea is also possible, as the planet is two-thirds ocean.

“If anybody found a piece of anything on the ground Monday morning, I would hope they wouldn’t get too close to it,” Suffredini said.

Known as the Early Ammonia Servicer, or EAS, the coolant tank is the largest piece of orbital trash ever tossed overboard by hand from the space station. Larger unmanned Russian and European cargo ships are routinely destroyed in the Earth’s atmosphere over the Pacific Ocean after their space station deliveries, but those disposals are controlled and preplanned.

The recent destruction of the European Space Agency’s Jules Verne cargo ship was eagerly observed by scientists hoping to glean new information on how objects behave as they enter Earth’s atmosphere. Observers aboard two chase planes caught photographs and video of the double-decker bus-sized spacecraft’s demise, but no such campaign is possible with the returning ammonia tank.

The last object to re-enter Earth’s atmosphere with prior notice was a small asteroid the size of a kitchen table that exploded in midair as it flew over Africa on Oct. 7.

It’s taken more than year for the ammonia tank to slowly slip down toward Earth due to atmospheric drag. During its time aboard the station, the tank served as a coolant reservoir to boost the outpost’s cooling system in the event of leaks. Upgrades to the station last year made the tank obsolete, and engineers were concerned that its structural integrity would not withstand a ride back to Earth aboard a NASA space shuttle.

Instead, they tossed it overboard, or “jettisoned” it in NASA parlance.

Suffredini said that while astronauts have accidentally lost a tool or two during spacewalks, the planned jettison of larger items is done with the utmost care to ensure the trash doesn’t hit the station or any other spacecraft as it circles the Earth. Engineers also make sure the risk to people on Earth is low, as well.

“As a matter of course, we don’t throw things overboard haphazardly,” Suffredini said. “We have a policy that has certain criteria we have to meet before you can throw something overboard.”

In the event the tank re-enters over land, NASA advised members of the public to contact their local authorities, or the U.S. Department of State via diplomatic channels if outside the U.S., if they believe they’ve found its remains.