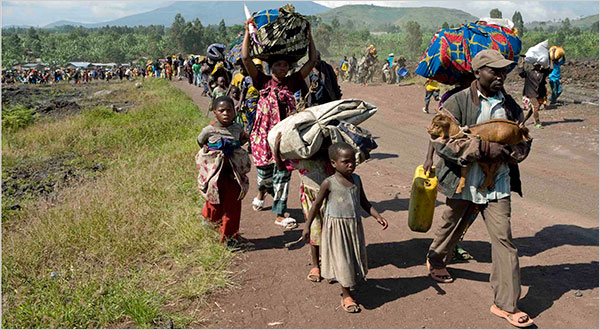 Congolese refugees fled from the city of Kibati towards Goma on Wednesday.

GOMA, Congo – The exodus has begun.

Women with babies on their backs. Families crammed into cars with coolers and suitcases stuffed to the windows. United Nations trucks. Aid workers. Businessmen. Congolese government troops literally running for their lives.

On Wednesday afternoon, countless people of all kinds poured out of Goma, a strategic Congolese city on the border of Rwanda, fleeing the advancing rebel forces massing on the outskirts of town.

This was a place that was supposed to be safe, a town full of war-weary, displaced people who had come here for shelter, a town that the United Nations peacekeepers had defended against the very same rebels before.

But this time may be different.

“The Congolese army has abandoned most of their positions,” said United Nations spokesman Madnodje Mounoubai. “The road to Goma is now open to the rebels.”

Eastern Congo has been torn by conflict for more than a decade. But if Goma falls, it will be the first time in years that rebels have snatched a major city – and a particularly important one because it is a staging ground for United Nations aid efforts that help keep millions alive.

Congo is also home to the largest United Nations peacekeeping mission on the planet, 17,000 troops, but Mr. Mounoubai, the spokesman, said it was not necessarily the job of United Nations peacekeepers to try to stop the rebels, who are led by a charismatic leader with unclear intentions. Mr. Mounoubai said the peacekeepers’ primary role was to protect Congolese civilians. Still, many people in Goma did not have much faith in that either.

She crossed the border, on foot, as dusk sank over the city and the streets emptied into an eerie silence.

Several residents said that vanquished Congolese soldiers were looting shops on their way out of town. A band of fleeing soldiers commandeered a car that had been rented by a team of Western journalists and threatened the journalists at gunpoint to drive them west, away from the rebels. At one Goma hotel, the manager demanded payment for the room up front.

“Who knows what will happen tomorrow,” he said.

A desperate, dangerous security vacuum seemed to be opening up. Congolese officials seemed dismayed – but not surprised.

“What can we do?”‘ said Kikaya Bin Karubi, a member of Congo’s Parliament. “We don’t have a national army. Our so-called army is a combination of different rebel militias, with a 100 from this group, a 100 from that group, and so on. They haven’t even trained together for a year. How do they stand a chance?”

The enemy they are facing is a relatively well-armed, cohesive force, led by Laurent Nkunda, a renegade Congolese general with impressive military acumen and a taste for crisp uniforms, dark sunglasses and power. He calls himself a protector of the Tutsi people. Many people here call him a warlord.

Congolese officials, including Mr. Karubi, have accused Rwanda of backing Mr. Nkunda in an attempt to turn eastern Congo into a buffer zone for Tutsi-led Rwanda. Officials in Rwanda have denied this.

It is not clear what Mr. Nkunda’s plans are. He has tried several times before to seize Goma, one of the biggest towns in eastern Congo and an important trade hub that sits near the crossroads of Congo, Rwanda and Uganda. His previous attacks were foiled by United Nations peacekeepers who used helicopter gunships to blast his rebels from the air.

But this time, he seems more determined – even talking about “liberating” the entire country, which would not be unprecedented because the rebellion that overturned Congo’s longtime dictator Mobutu Sese Seko in 1997 started out in the same green hills around here.

Mr. Nkunda seems to have learned from his mistakes. United Nations officials said he has deftly calibrated his tactics to a more guerilla-style war this time, with his soldiers attacking in small groups that blend into the thick forest or the civilian population.

In 2004, when Mr. Nkunda’s forces briefly seized control of Bukavu, a similarly-sized city just south of Goma, Mr. Nkunda’s men (and boys – because many are four-foot-tall child soldiers) ransacked the town, smashing windows, pillaging stores and going house to house to rape women.

Many people in his path, who live in the hilltop, thatched-roofed villages that ring Goma, are now fleeing in droves.

“We have thousands and thousands of refugees on the move,” said Ivo Brandau, a United Nations spokesman in Kinshasa, Congo’s capital. “Access is still a huge problem. Because of the fighting, we can’t get to many of them.”

United Nations officials said on Wednesday said they were considering a formal evacuation of their personnel in Goma but they had not made the decision yet. Many United Nations aid workers in Goma were concentrated in fortified compounds.

Goma residents said that Mr. Nkunda’s forces were within 5 miles of the town. Heavy machine fire erupted around 7 p.m., followed by the deep bark of artillery.

Oscar Batezi, a law student, stood on the streets of Goma and watched his world spin once again into a cycle of the violent unknown.

“If Nkunda comes here, nothing good will come of it,” he said. “Our government is a total disappointment. I have no place to go. All I can do is wait.”