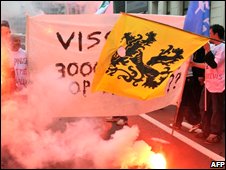 One banner read: “Soaring diesel plus cheap fish equals ruin for fishermen.” Another chided Prime Minister Jose Luis Rodriguez Zapatero: “You are sending us to the cemetery.”

One union leader in Barcelona said the country’s fishing fleet was at a standstill.

“We must mobilise like the French and if we have to block ports, we’ll block them,” Xavier Aboy, a union leader in Galicia, told AFP.

In France the authorities have offered 100m euros in aid, prompting some fishermen to return to work.

At dawn on Thursday, French riot police cleared protesters from the Mediterranean oil depots of Fos-sur-Mer and Lavera, and a Total refinery at La Mede in the south.

On the same day police clashed with fishermen who burned tyres in the Atlantic port of Lorient, while hundreds protested in Quimper, Brittany.

On Friday, protesters blockaded the Channel port of Le Havre.

Hundreds of farmers have also been blocking oil terminals near the cities of Dijon and Toulouse.

In Italy, at least 5,000 fishermen are expected to strike, the main trade union Federcoopesca says. The government has already refused emergency aid to the industry.

But the BBC’s David Willey in Rome says many fishermen are adopting a wait-and-see policy as talks with the government continue, and in the Adriatic ports the response to the strike has been mixed.

“No boats went out” in Portugal, a union leader there said, and in the central port of Peniche boat owners set up a barrier to prevent unloading.