See my commentary below.

Barak, speaking on CNN’s Fareed Zakaria GPS program, indicated that Israel’s patience was wearing thin — and provided an ominous response when asked about the growing speculation of an Israeli military strike.

“I don’t think that that is a subject for public discussion,” he said. “But I can tell you that the IAEA report has a sobering impact on many in the world, leaders as well as the publics, and people understand that the time has come.”

The International Atomic Energy Agency published a report on November 8 saying there was “credible” information that Iran was carrying out “activities relevant to the development of a nuclear explosive device.”

Mahmoud Ahmadinejad rejects the International Atomic Energy Agency’s ‘serious concerns’ about research and development work by Iran, which the agency described as ‘specific to nuclear weapons’. In its report on Iran’s nuclear programme, the IAEA said it had accumulated more than 1,000 pages of documentation that led it to believe suspected nuclear weapons work was carried out under a ‘structured programme’ until 2003, and ‘some may still be ongoing’

When Yukiya Amano took over as the head of the UN nuclear watchdog last year, American diplomats described him as “director general of all states, but in agreement with us” 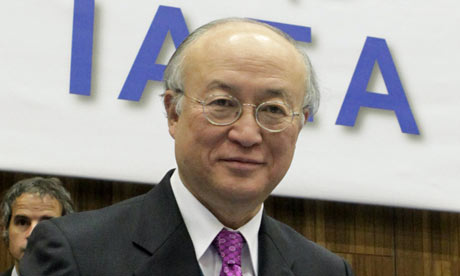 This article was amended on 21 December 2010 to remove a defamatory reference to a named IAEA official.

As Mohamed ElBaradei’s term as director general of the International Atomic Energy Agency (IAEA) headed towards a close last year, Washington looked forward to the new era under Yukiya Amano with relish. In a cable in July, the American chargé, Geoffrey Pyatt, wrote:

In a later cable in October, the US mission in Vienna goes as far as describing Amano as “DG of all states, but in agreement with us”.

Amano reminded [the] ambassador on several occasions that he would need to make concessions to the G-77 [the developing countries group], which correctly required him to be fair-minded and independent, but that he was solidly in the U.S. court on every key strategic decision, from high-level personnel appointments to the handling of Iran’s alleged nuclear weapons program.

More candidly, Amano noted the importance of maintaining a certain “constructive ambiguity” about his plans, at least until he took over for DG ElBaradei in December. With a bow to the G-77, Amano felt obliged to emphasize the importance of “balance” regarding the Agency’s work in peaceful uses of nuclear technology. For staff morale reasons, Amano planned to work on improving the quality of management while publicly praising the current standards and commending staff members for their dedication.

Most importantly, the US mission in Vienna believed that Amano would not see himself as a political player over Iran, a role the US and its allies frequently accused ElBaradei of coveting. In a July cable, Pyatt noted:

He distinguished his approach on Iran from that of
ElBaradei; Amano sees the DG/IAEA as a neutral and impartial party to Iran’s safeguards agreement rather than as “an intermediary” and saw his primary role as implementing safeguards and UNSC[United Nations Security Council]/Board resolutions. He stressed that the IAEA could not replace the P5 [+] 1 political framework for dialogue with Iran, nor vice versa.