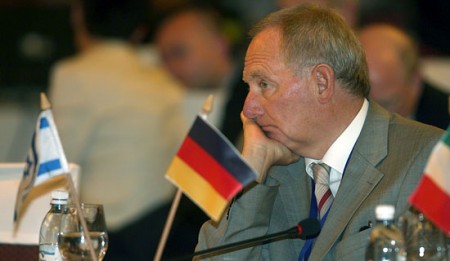 Wolfgang Schauble, Minister of the Interior for Germany, at the First International Security Forum of Ministers of Interior and Public Security in Jerusalem on May 29. (Menahem Kahana/Agence France-Presse)

BERLIN: Despite strong criticism from the opposition and even its own coalition partners, Chancellor Angela Merkel’s government agreed Wednesday to give Germany’s police forces greater powers to monitor homes, telephones and private computers, maintaining that an enhanced reach would protect citizens from terrorist attacks.

But opposition parties and some Social Democrats who share power with Merkel’s conservative bloc criticized the measures in the draft legislation, saying they would further erode privacy rights that they contend have already been undermined, after revelations of recent snooping operations conducted by Deutsche Telekom, one of the country’s biggest companies.

Deutsche Telekom had for some time been monitoring calls of its employers, despite federal regulations on strict data protection.

The proposed legislation would for the first time give federal police officers the right to take preventive measures in cases of suspected terrorism.

But the nature of the surveillance, which would require the approval of the Bundestag, the lower house of Parliament, has worried many Germans, with some commentators recalling the Nazi past and its vast machinery of spying. They also point to the more recent role of the Stasi, the hated secret police in the once Communist-ruled East Germany, which established a pervasive system of keeping tabs on almost everyone in the country.

The draft law was fashioned after months of intense debate led by Wolfgang Schäuble, the conservative interior minister, who has long wanted the security forces to be given more leeway for surveillance.

Not even the home will be safe from surveillance

Changes proposed to the law governing Germany’s federal criminal police operations would allow investigators to use wire taps and surveillance cameras in homes of innocent citizens to keep tabs on terror suspects.

Under the government proposals, federal police would be permitted to install “hidden technical equipment, that is to say bugs or cameras inside or outside apartments … if there is a pressing danger for state security,” interior ministry spokesman Stefan Paris said at a news conference on Friday, April 18.

“I would urgently like to stress that there are very, very strict conditions … and it is not the case that everywhere in this country secret cameras or listening devices will be installed in living spaces,” he said. “It is about terrorist threats that would be averted through preventative measures by the federal police.”

Be careful what you — and your friends — say at home

He added that such methods were already allowed in several German states.