A summary of Second Quarter 2009 Negative Equity Data from First American CoreLogic shows that Nearly One-Third Of All Mortgages Are Underwater.

There are some interesting tables and graphs in the article that inquiring minds are investigating. Here are some partial alphabetical lists.

Nevada, not shown has a near-negative equity share of 68.9% and a Loan-To-Value ratio of a whopping 115%!

It is disingenuous to say there are only a half-dozen or so problem states, when the problem states are where people live. It is wrong to treat Alabama and Alaska the same as California or Florida.

32-37% Of All Mortgage Holders Are Stuck, Unable To Sell

Take a look at that first line. California has $2.4 trillion in mortgages debt. 42.0% of the properties have negative equity. Think Wells Fargo (WFC) sitting on its massive share of California pay-option-arms is “Well Capitalized”? If so, think again.

Read moreBrace for a New Wave of Foreclosures, the Dam is About to Break

Don’t miss:
– Day of Reckoning for California and, ultimately, for all of America:
“Why I Expect a Default on California’s Bonds”

A group of the biggest U.S. banks said they would stop accepting California’s IOUs on Friday, adding pressure on the state to close its $26.3 billion annual budget gap.

The development is the latest twist in California’s struggle to deal with the effects of the recession. After state leaders failed to agree on budget solutions last week, California began issuing IOUs — or “individual registered warrants” — to hundreds of thousands of creditors. State Controller John Chiang said that without IOUs, California would run out of cash by July’s end.

But now, if California continues to issue the IOUs, creditors will be forced to hold on to them until they mature on Oct. 2, or find other banks to honor them. When the IOUs mature, holders will be paid back directly by the state at an annual 3.75% interest rate. Some banks might also work with creditors to come up with an interim solution, such as extending them a line of credit, said Beth Mills, a California Bankers Association spokeswoman.

Meanwhile, on Monday morning, a budget meeting between Gov. Arnold Schwarzenegger and legislative leaders failed to produce a result. Amid the budget deadlock, Fitch Ratings on Monday dropped California’s bond rating to BBB, down from A minus, the latest in a series of ratings downgrades for the state.

The group of banks included Bank of America Corp., Citigroup Inc., Wells Fargo & Co. and J.P. Morgan Chase & Co., among others. The banks had previously committed to accepting state IOUs as payment. California plans to issue more than $3 billion of IOUs in July. 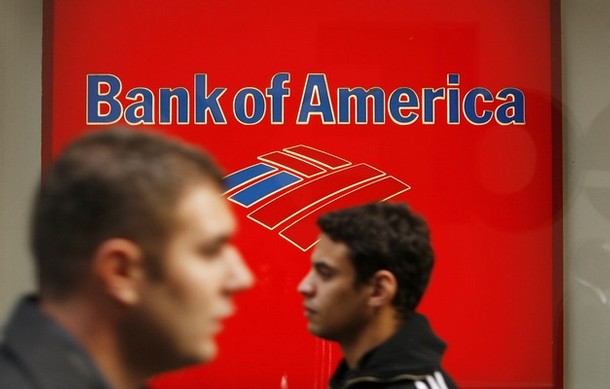 TARP investments are certainly “troubled.” And Washington, it turns out, isn’t the best short-term investor.

The government’s investments in the nation’s ailing banks, made through the newly coined Troubled Asset Relief Program, or TARP, have taken a huge hit since the program started making capital injections last October. Thanks to last week’s stock market sell-off, the government is now sitting on a paper loss of at least 55 percent, or $107.7 billion, on the $195.5 billion invested under the TARP program.

That amounts to a $768 paper loss for every taxpaying household, according to the Ethisphere Institute, a think tank focused on business ethics. And these figures do not include the losses from Monday’s sharp drop on Wall Street.

The Ethisphere Institute has created the Ethisphere TARP Index to track the return on the government’s investments under the capital purchase portion of TARP.

Some of the biggest losers last week were Citigroup, Bank of America, Wells Fargo and JPMorgan Chase, which collectively have cost taxpayers $70.6 billion in paper losses so far. Excluding the investments in those four banks, the TARP fund has still lost 38.6 percent, or $37 billion, through last Friday, Ethisphere reports. 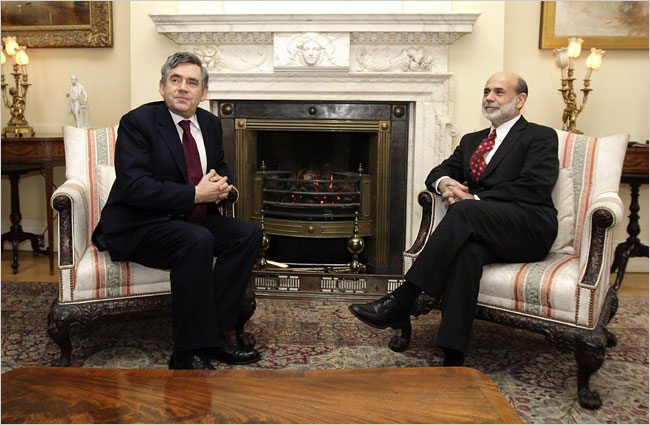 WASHINGTON – Even before word came on Tuesday that Citigroup might split into pieces to shore up its finances, an unpleasant message was moving through Congress and President-elect Barack Obama’s transition team: the banks need more taxpayer money.

In all likelihood, a lot more money.

Mr. Obama seems to know it; a week before his swearing-in, he is lobbying Congress to release the other half of the financial industry bailout fund. Democratic leaders in Congress seem to know it, too; they are urging their rank and file to act quickly to release the rescue money. And Ben S. Bernanke, the chairman of the Federal Reserve, certainly knows it.

On Tuesday, Mr. Bernanke publicly made the case that one of the most unpopular and most scorned programs in Washington – the $700 billion bailout program – needs to pour hundreds of billions more into the very banks and financial institutions that already received federal money and caused much of the credit crisis in the first place.

The most glaring example that the banking system needs even more help is Citigroup. Though it already has received $45 billion from the Treasury, it is in such dire straits that it is breaking itself into parts.

Like many banks, Citi is finding that its finances keep deteriorating as the economy continues to weaken.

Read moreBanks in Need of Even More Bailout Money 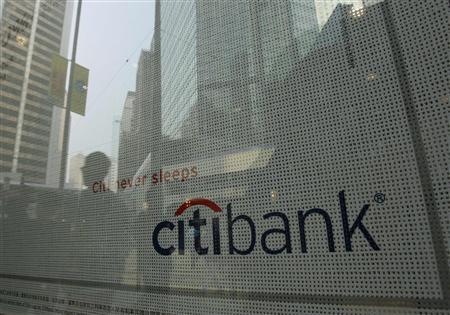 Pedestrians are reflected in the window of a Citibank branch in Hong Kong’s financial Central District November 18, 2008. REUTERS/Bobby Yip

“Debt or TARP capital is not true capital. Long-term debt financing is not the solution. Only injections of true tangible common equity will solve the current crisis,” he said in a note dated November 19.

Currently, the U.S. financial system has $37 trillion of debt outstanding, he noted.

Combined, these eight companies have roughly $12.2 trillion of assets and only $406 billion of tangible common capital, or just 3.4 percent, the analyst said in his note to clients.

Miller said these institutions need somewhere between $1 trillion and $1.2trillion of capital to put their balance sheets back on solid ground and begin to extend credit again, given their dependence on short-term funding and the illiquid nature of their asset bases. 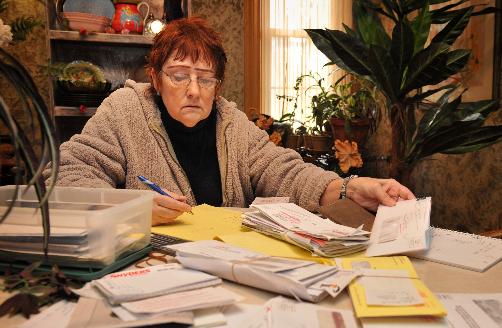 J.L. Fish thought she was a fine credit card customer, and that Wells Fargo shared that high opinion. That’s why the Mankato retiree was stunned to see the bank raise the interest rate on her Platinum VISA from 5.2 percent on her June bill to 17.69 percent come July.

Companies cracking down, even on those with good credit, leaving customers to face interest rate leaps, lower credit limits and even canceled cards.

“I nearly fainted,” said Fish, 61, who lives on about $1,400 a month from Social Security and a small disability pension. She has made the minimum payment each month without fail on about an $8,000 balance, she said. But the interest rate jump nearly doubled her monthly minimum from $115 to $198 –more than she can cover. So, she took the bank’s offer for an “opt out” — which involved canceling the card and then setting up a new billing schedule until she pays off her entire debt.

“I have never been late in my payments,” said Fish, noting payments are automatically deducted from her bank account. “Why did Wells Fargo do this to me?”

The answer is bigger than Fish. Banks nationwide are sweeping across their credit card accounts and tightening lending standards — leaving customers to face interest rate leaps, lower credit limits, and even canceled cards. A Federal Reserve Bank survey showed 83 percent of major card issuers tightening their lending standards in the third quarter of this year, up from 45 percent in the second quarter.

Economists partly blame the credit markets — where banks buy money to lend — which came to a virtual standstill as the world’s stock markets crumbled. But others hear an ominous echo of the subprime mortgage meltdown — with banks now backpedaling from similarly lax lending with credit cards that have left them with exploding losses.

“There is a credit card equivalent of a toxic subprime mortgage,” concluded a report earlier this month by Gregory Larkin, senior analyst at Innovest Strategic Value Advisors, an investment advisory firm in New York. “This is precisely what we need to be looking at right now.”

Oct. 25 (Bloomberg) — Alpha Bank & Trust in Alpharetta, Georgia, with $346 million in deposits, was seized by regulators and closed as the collapse of the housing market and loan defaults claimed a 16th U.S. bank this year.

Alpha, with $354 million in assets, was shut by the Georgia Department of Banking and Finance, and the Federal Deposit Insurance Corp. sold the deposits to Stearns Bank N.A., of St. Cloud, Minnesota. Alpha’s two offices north of Atlanta will open on Oct. 27 as branches of Stearns Bank, the FDIC said yesterday.

Regulators have closed the most banks in 15 years, and the collapses of Washington Mutual Inc. and IndyMac Bancorp Inc. were among the biggest in history. About 4.4 percent of Alpha’s assets were defaulted real-estate loans it took back on its balance sheet, quadruple the total for most U.S. banks, based on data compiled by Charlottesville, Virginia-based SNL Financial. 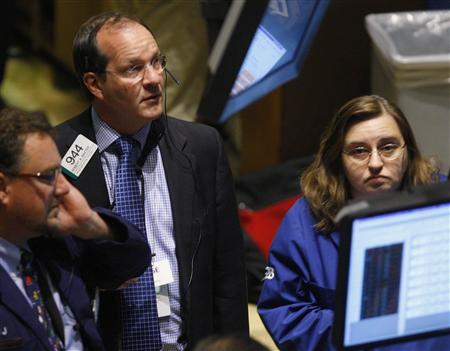 NEW YORK (Reuters) – Stocks tumbled to 5 year lows on Wednesday as investors grappled with an increasingly dire outlook for the global economy following a raft of disappointing profits and outlooks from major U.S. companies.

Boeing Co’s shares fell 7.5 percent after the aircraft maker reported a steep drop in quarterly profit and warned it might need to provide financing to some of its customers in 2009. 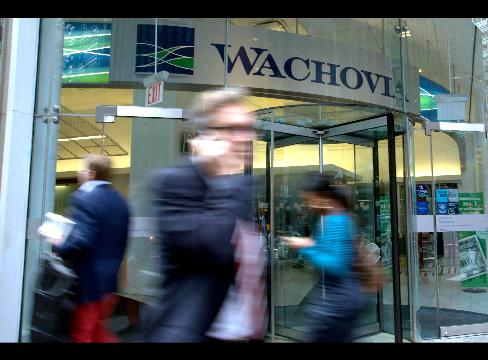 The third-quarter loss was $23.9 billion, or $11.18 a share, compared with net income of $1.6 billion, or 85 cents, in the same period a year earlier, the Charlotte, North Carolina-based company said today in a statement. The loss was $2.23 a share excluding one-time items, versus the average loss estimate of 2 cents from 16 analysts surveyed by Bloomberg.

Wells Fargo outbid New York-based Citigroup Inc. for Wachovia, agreeing to spend $14 billion to create the largest U.S. branch network. San Francisco-based Wells Fargo was aided by a change in tax rules that makes it easier to absorb losses on Wachovia’s mortgages. The bank also agreed to sell assets to comply with U.S. regulations if the combined company controls more than 10 percent of deposits nationwide.

“Wells Fargo will get substantial tax benefits from losses incurred by Wachovia, so the more losses the better off they are,” Chris Marinac, managing director of FIG Partners LLC in Atlanta, said before earnings were released. “It’s kind of a free pass.”