I know I’ve posted another article about this already here…

… but this certainly deserves to be mentioned again.

Vince Foster was a mentor to Hillary when they worked together at the Rose Law Firm in Little Rock, Arkansas.  When Bill was confirmed as the 42nd President of the United States on January 20, 1993, Foster took a role as his Deputy White House Counsel.   6 months later, to the day, Foster was found dead in Fort Marcy Park, along the Potomac River, of an apparent “suicide” resulting from a gun shot from a .38 caliber revolver. 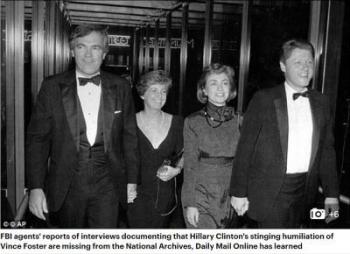 Like a lot of things surrounding the Clintons, Foster’s “suicide” has always been shrouded in mystery.  A few months ago, The Daily Mailinterviewed former FBI agents Coy Copeland and Jim Clemente who claimed that Hillary “triggered” Foster’s “suicide” by “humiliating” him in front of colleagues just a few days before his death.

‘Hillary put him down really, really bad in a pretty good-size meeting,‘ Copeland says. ‘She told him he didn’t get the picture, and he would always be a little hick town lawyer who was obviously not ready for the big time.’

– “Vince Foster’s Ghost” Reappears – A Blast From The Archive Past:

Just a month after Trump called out the Vince Foster “suicide” as “very fishy” to say the least, the documentary “Foster’s Ghost” has resurfaced from the archives, detailing the unusual situation surrounding the death of Bill Clinton’s best friend and personal lawyer…

According to the WaPo, “Trump said another topic of potential concern is the suicide of former White House aide Vincent Foster, which remains the focus of intense and far-fetched conspiracy theories on the Internet.“