If anyone thought the bad blood between Germany and the rest of the insolvent proletariat, aka the part of the Eurozone which is out of money (most of it), and which has been now confirmed will be supporting Obama (one wonders what the quid for that particular quo is, although we are certain we will find out as soon as December), complete collapse of the Greek neo-vassal state of the globalist agenda notwithstanding, had gone away, here comes former ECB chief economist Juergen Stark to dispel such illusions. In an interview with Austrian Die Presse, the former banker said what everyone without a PhD understands quite well: “The break came in 2010. Until then everything went well…”Then the ECB began to take on a new role, to fall into panic…. Together with other central banks, the ECB is flooding the market, posing the question not only about how the ECB will get its money back, but also how the excess liquidity created can be absorbed globally. “It can’t be solved by pressing a button. If the global economy stabilises, the potential for inflation has grown enormously… It gave in to outside pressure … pressure from outside Europe” Why, whichever bank headquartered at 200 West, NY, NY might he be referring to?

He added that “panic” about the eurozone breaking up was “nonsense” but that the only way to end the crisis was for member states to bring down their debts and implement structural reforms to boost economic growth.

“Governments have recognised that returning to budgetary discipline is indispensable. Markets focus much more on whether states will be able to service their debts in five years’ time,” he said.

Mr Stark quit in late 2011, following in the footsteps of former Bundesbank head Axel Weber, who stepped down earlier in the year from Germany’s central bank because of unease about the ECB’s policies.

Mr Weber’s successor Jens Weidmann was the only member of the ECB’s policy-setting governing council to vote against the bank’s new programme earlier this month.

“Weidmann’s arguments … should not be made light of,” Mr Stark told Die Presse. “The way in which his position has been publicly commented upon by the ECB leadership has crossed the line of fairness.”

And speaking of continuing takeover of the world by a few not so good banks, a loud warning that the advent of globalist influences (i.e., bankers) is taking over Europe and that the “destruction of Europe’s democracy is in its final phase” comes not from some European (or American… or Zimbabwean) fringe blog, but from the 71 year old president of the Czech Republic, someone who certainly knows about the difference between communism and democracy, Vaclav Klaus. In an interview with The Sunday Telegraph, “Václav Klaus warns that “two-faced” politicians, including the Conservatives, have opened the door to an EU superstate by giving up on democracy, in a flight from accountability and responsibility to their voters. “We need to think about how to restore our statehood and our sovereignty. That is impossible in a federation. The EU should move in an opposite direction,” he said.”

Read moreFormer ECB Chief Economist Says ECB Is In Panic, As Czech President Warns The End Of Democracy Is Imminent 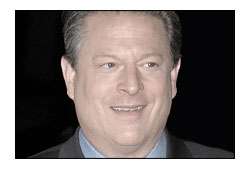 Washington – Czech President Vaclav Klaus said Tuesday he is ready to debate Al Gore about global warming, as he presented the English version of his latest book that argues environmentalism poses a threat to basic human freedoms. “I many times tried to talk to have a public exchange of views with him, and he’s not too much willing to make such a conversation,” Klaus said. “So I’m ready to do it.”

Klaus was speaking a the National Press Building in Washington to present his new book, Blue Planet in Green Shackles – What Is Endangered: Climate or Freedom?, before meeting with Vice President Dick Cheney Wednesday.

“My answer is it is our freedom and, I might add, and our prosperity,” he said.

Gore a former US vice president who has become a leading international voice in the cause against global warming, was co-winner of this year’s Nobel Peace Prize. Gore’s effort was highlighted by his Oscar winning documentary film An Inconvienent Truth.

Klaus, an economist, said he opposed the “climate alarmism” perpetuated by environmentalism trying to impose their ideals, comparing it to the decades of communist rule he experienced growing up in Soviet-dominated Czechoslovakia.

“Like their (communist) predecessors, they will be certain that they have the right to sacrifice man and his freedom to make their idea reality,” he said.

Klaus said a free market should be used to address environmental concerns and said he oppposed as unrealistic regulations or greenhouse gas capping systems designed to reduce the impact of climate change.

“It could be even true that we are now at a stage where mere facts, reason and truths are powerless in the face of the global warming propaganda,” he said.

Klaus alleged that the global warming was being championed by scientists and other environmentalists whose careers and funding requires selling the public on global warming.

“It is in the hands of climatologists and other related scientists who are highly motivated to look in one direction only,” Klaus said.