On this special day for families across America, I want to share the timeless words I’ve shared with readers on past Thanksgivings.

Live your life that the fear of death can never enter your heart.
Trouble no one about his religion.
Respect others in their views and demand that they respect yours.
Love your life, perfect your life, beautify all things in your life.
Seek to make your life long and of service to your people.
Prepare a noble death song for the day when you go over the great divide.
Always give a word or sign of salute when meeting or passing a friend,
or even a stranger, if in a lonely place.
Show respect to all people, but grovel to none.
When you rise in the morning, give thanks for the light,
for your life, for your strength.
Give thanks for your food and for the joy of living.
If you see no reason to give thanks, the fault lies in yourself.
Abuse no one and no thing, for abuse turns the wise ones to fools
and robs the spirit of its vision.
When your time comes to die,
be not like those whose hearts are filled with fear of death,
so that when their time comes they weep and pray for a little more time
to live their lives over again in a different way.
Sing your death song, and die like a hero going home.

With warmth, peace and love on this Thanksgiving Day,
Michael Krieger

– These Companies Actually Want Their Employees to be Thankful this Thanksgiving:

By now, most Americans are well aware of the retail chaos that strikes after Thanksgiving. People are trampled as they run into stores like third-class Titanic passengers thrashing to escape the sinking lower decks. Fights over plastic products fill the aisles of giant retail chains, and every year, Americans are shot, stabbed, and bludgeoned amid the chaos. Such altercations have inspired the creation of a website called blackfridaydeathcount.com, which tracks deaths and injuries incurred during the decidedly American ‘holiday.’

– More Americans Will Use Food Stamps For Thanksgiving This Year Than Ever Before (U.S. News, Nov 20, 2012):

More Americans will use food stamps to buy their Thanksgiving dinner this year than ever before, according to a new report from the nonprofit government watchdog group The Sunlight Foundation.

The Food Stamp Challenge, which challenges higher-income families to live as if they are on food stamps, estimates that a person on food stamps has a budget of about $1.25 per meal. In other words, a family on food stamps must buy an entire meal per person for less than the cost of an average cup of coffee.

The Thanksgiving dinner cost chart details the increased numbers since 1986: 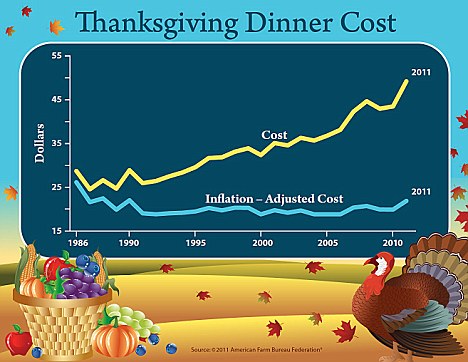 Thanksgiving is a time for families to come together and celebrate, but this year may be your most expensive Thanksgiving yet thanks to skyrocketing food costs and an overall increased demand for poultry. It now costs, on average, $49.20 to feed 10 individuals on Thanksgiving. Up $5.73 from last year according to the American Farm Bureau Federation, the cost is about 22 percent more expensive than it was last year.

Last year, a 16-pound Thanksgiving turkey was priced at $17.70. This year, the same bird costs an average of $21.60. The price rise signifies the highest jump in 20 years.

Due to the increased cost of delivery, rising food costs, and the overall handling of food, supermarkets and other food sellers are increasing prices across the board. In fact the difference in price does not only apply to the Thanksgiving turkey. The cost of many other food items also increased from last year, including milk and other popular Thanksgiving food items: