As a side note: Gerald Celente officially supported Ron Paul … before.

All my readers know that Ron Paul was the only candidate that I ever supported.

The second amendment is all that is left.

Here are some hints that something about Ron Paul must be terribly wrong:

– Ron Paul And Freemasonry: Ritual And The Scottish Rite:

This is an exclusive interview taken on Thursday May 31st, 2012 which was before Rand announced his official support for neocon Mitt Romney.

The clip comes out of a three hour interview that we did with Tarpley for our future documentary motion picture.

None of the interview was going to be released until the documentary came out but due to the recent controversy surrounding Rand Paul’s support for Mitt Romney we have decided to release this clip.

Some will say Tarpley is spot on, others will say he is exposing himself as a Marxist shill.

If you endorse elite puppet Mitt Romney (or Obama) you have much to answer for and you better be disgusted, especially with yourself for doing so.

– Linguistic analysis of Rand Paul’s endorsement of Romney contradicts his words: Rand Paul is disgusted with him! (Natural News, June 9, 2012):

In the aftermath of the shock and the overwhelming feeling of betrayal following Sen. Rand Paul’s endorsement of Mitt Romney for president, most people are trying to understand WHY it happened. But to my knowledge no one has yet analyzed the linguistics, the intonation and the micro-expressions that Rand Paul delivered as part of his announcement, because they may provide even more information than his words.

Here, I offer a brief linguistic and micro-expressions analysis of Rand Paul’s delivery of his announcement. What you’ll see here is that even Rand Paul is disgusted with his own endorsement.

Read moreLinguistic Analysis Of Rand Paul’s Endorsement Of Mitt Romney Contradicts His Words: Rand Paul Is Disgusted With Him!

Rand Paul just endorsed a man who is deeply hostile to human liberty.

Perhaps that’s Rand’s idea of playing politics? Come to the table, strike a deal, get what you can. Trouble is, it’s tough striking a good deal when the guy on the other side of the table believes that the government should be allowed to claim — without having to produce any evidence whatsoever — that certain people are terrorists, and therefore should be detained indefinitely without any kind of due process. 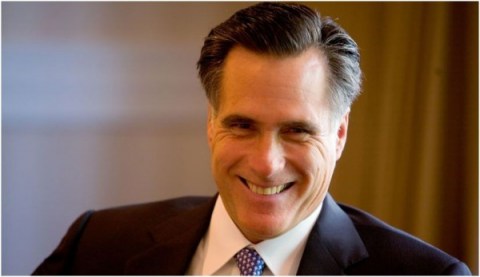 Yes, I would have [signed the NDAA]. And I do believe that it is appropriate to have in our nation the capacity to detain people who are threats to this country, who are members of al Qaeda. Look, you have every right in this country to protest and to express your views on a wide range of issues but you don’t have a right to join a group that has killed Americans, and has declared war against America. That’s treason. In this country we have a right to take those people and put them in jail. If I were president I would not abuse this power. But people who join al Qaeda are not entitled to rights of due process under our normal legal code. They are entitled instead to be treated as enemy combatants.Mitt Romney

Except, if the government had any evidence they were really members of al-Qaeda and engaged in a war against America they could be charged with offenses under current laws and tried in front of a jury of their peers. As was proven when Judge Katherine Forrest struck down the indefinite detention provision of the NDAA as unconstitutional, the real detention targets are people like the ones who brought the case — writers, investigative journalist and whistleblowers: people like Chris Hedges, Noam Chomsky, Daniel Ellsberg, Jennifer Bolen, and Birgitta Jonsdottir.

What’s left from America? The SECOND AMENDMENT and ‘they’ know it:

File this under signs the Ron Paul campaign is really, truly over: Kentucky Sen. Rand Paul threw his support tonight to Mitt Romney.

The endorsement came in an appearance on “Hannity,” a little less than 24 hours after the elder Paul acknowledged in an email that his delegate total is “not enough to win the nomination.”

Romney embraced the endorsement in a press release, calling Rand Paul a “leading voice in the effort to scale back the size and reach of government and promote liberty.”

A sneaky, eleventh-hour attempt by Senator Dick Durbin (D-Ill.) to essentially shut down the supplement industry alongside an amendment pertaining to prescription drug user fees has failed. In a vote of 77-20, the U.S. Senate voted to table Amendment No. 2127, which would have created “duplicative, unnecessary, and unexpected new regulations” for the supplement industry that could have resulted in many common supplements being pulled from store shelves.

To the surprise of the entire natural health community, the unveiling of Amdt. No 2127 came late Tuesday afternoon, according to the Natural Products Insider (NPI), just one day before the bill to which it was attached, S. 3187, the Food and Drug Administration Safety and Innovation Act, was set for a vote. But because the natural health community immediately sprung into action to oppose Amdt. No 2127, it was successfully defeated.

– Here Are the 15 Senators Who Voted to Stop Armed FDA Agents From Conducting Warrantless Raids on America’s Farmers (Not One of Them is a Democrat) (Reason, May 24, 2012):

Earlier today an amendment proposed by Sen. Rand Paul (R-Ky.) that would have prevented Food and Drug Administration agents from carrying guns and from raiding farms without warrants, was voted down on the Senate floor by 78 senators. These 15 senators, meanwhile, supported the amendment by voting against tabling it. Not a single one is a Democrat:

The political news on this slowish Monday morning comes courtesy of the TSA and those who object to their policies, such as in this case Senator Rand Paul, son of Ron Paul, who has just been detained for refusing a full body pat down. This should teach Rand Paul to not accept Wall Street (and/or Warren Buffett) donations of free NetJets hours. 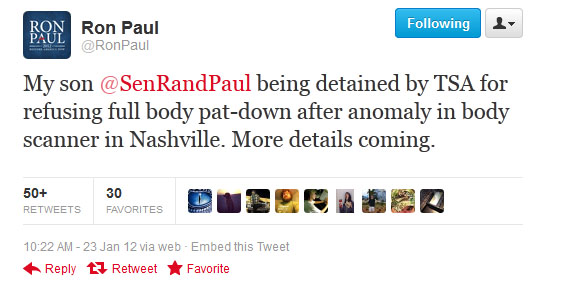