State Department emails published by Gawker on Tuesday show that a CNN journalist colluded with a top Hillary Clinton State Department aide in an attempt to smear Kentucky Senator Rand Paul during the former secretary of state’s 2013 testimony on the Benghazi attacks.

Elise Labott, a foreign affairs reporter for CNN, is now serving a two-week suspension from the Atlanta-based global news network for posting a critical tweet of Senator Paul during the hearing. She apparently did so at the directive of Clinton aide Philippe Reines. The social media post chided Senator Paul for asking Clinton difficult questions throughout the Senate Foreign Relations Committee hearing. Labott also coordinated with Reines to tweet a favorable quote from Clinton’s testimony.

(But then again: Rand Paul is an elite puppet, like Obama, Bush, Clinton, etc.)

Rand is a Senator, but he sure does use his power as a Senator to do what he swore to do. Defend the Constitution. This is pretty epic.

Seriously, I’m an IT guy working in the industry a few decades. Listening to this Homeland Security Secretary speak is really comical. If any of you are gearheads, you really have to listen to this guy talk. It will prove to you how strong the concentration of tardness exists at the very top of our govt.

But, but, but … Hillary and Jeb are a lot worse than Rand Paul ….

Yet, a puppet is a puppet and will do what its masters told him/her to do.

And the puppet masters of the Bush’s, the Clinton’s and Obama are – at the highest level – the same as those of Rand Paul.

Americans have NO choice. 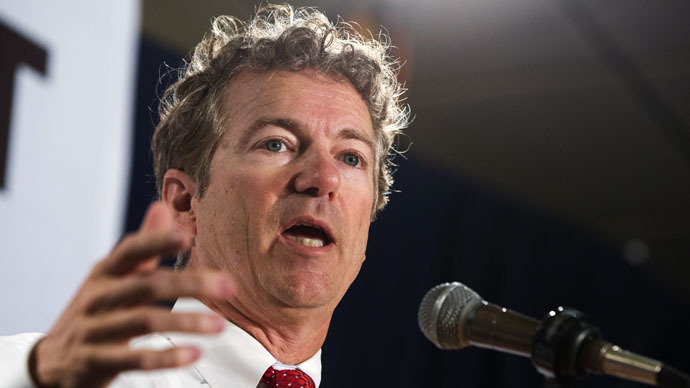 Paul, 52, announced Tuesday morning that he’ll indeed be pursuing the Republican Party’s nomination for president ahead of next year’s election.

“I am running for president to return our country to the principles of liberty and limited government,” Paul announced on his website.

Kentucky Senator Rand Paul will officially seek the White House in 2016, according to a federal election filing.

The development is not surprising as Paul has signaled in the coming months that he is pursuing a run. The senator, who was elected in 2010, has signaled he will officially announce his candidacy in April.

Paul was elected to the Senate in 2010 and is a favorite amongst the conservative Tea Party. He recently took the straw poll at the CPAC event last month. 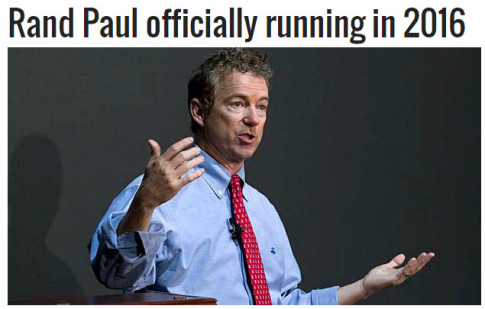 Yes, to all of the above.

It’s just that Rand Paul is a complete sellout to TPTB, just like all the other elite puppets like Obama, the Bush’s, the Clinton’s etc.

The only reason people like Rand Paul are in the political arena is to give Americans the illusion that they have freedom of choice – well, they don’t.

Having recently exposed the mainstream media’s lack of objectivity in “slanted and distorted” interviews, Rand Paul has turned his focus to another staple of the status quo – his father’s arch-nemesis, The Fed. As WSJ reports, Sen. Rand Paul unleashed a blistering attack on the Federal Reserve in Iowa on Fridasy evening, calling for an audit of the institution’s books and blaming it for fueling income inequality. “Once upon a time, your dollar was as good as gold,” he explained, adding “then for many decades, they said your dollar was backed by the full faith and credit of government.” Do you know what it’s backed by now? “Used car loans, bad home loans, distressed assets and derivatives.”

Speaking to an enthusiastic crowd of Iowa activists, Sen. Rand Paul on Friday evening delivered a blistering attack on the Federal Reserve, calling for an audit of the institution’s books and blaming it for fueling income inequality.

Yes, and your own son is a traitor.

(Links are down below.)

If Americans were honest with themselves they would acknowledge that the Republic is no more. We now live in a police state. If we do not recognize and resist this development, freedom and prosperity for all Americans will continue to deteriorate. All liberties in America today are under siege.

It didn’t happen overnight. It took many years of neglect for our liberties to be given away so casually for a promise of security from the politicians. The tragic part is that the more security was promised — physical and economic — the less liberty was protected.

With cradle-to-grave welfare protecting all citizens from any mistakes and a perpetual global war on terrorism, which a majority of Americans were convinced was absolutely necessary for our survival, our security and prosperity has been sacrificed.

It was all based on lies and ignorance. Many came to believe that their best interests were served by giving up a little freedom now and then to gain a better life.

Read moreRon Paul: “… The Republic Is No More. We Now Live In A Police State”

[Alternate URL for this article:
Man Who Confronted ‘Zionist’ George H. W. Bush in A Houston Pizza Place Has A Message For Rand Paul.]

[Editor’s note from Martin Hill: You may remember my friend Greg Johnson from four years ago when he confronted George H.W, Bush in a Houston pizza place, calling him a ‘Zionist murderer piece of shit.’ The confrontation made international news, Bill O’Reilly called for Johnson’s arrest and the U.S. Secret Service came to his house the next day, which he video-recorded for his own safety. [See videos and details here.] Here are Greg’s thoughts on U.S. Senator Rand Paul for my new website RandPaulZionist.com. You may contact Greg Johnson here.]

Where to begin and how will I close out this expression of my thoughts on Rand Paul and his fellow zionist puppet politicians? The evidence exposing him as a fraud and the facts of the dire consequences for the U.S. (and all life on Earth) due to support for Israel and Jewish supremacists are insurmountable. The breadth of information to be found outside of the mainstream, Jewish-owned and -controlled media, Hollywood, the publishing industry and the rest of their criminal sources of unbelievable influence is overwhelming. Countless millions around this once-free nation buy into the endless lies while others who can think for themselves search for the truth. There are also many who fall everywhere in between those two ways of thinking (or not thinking). As the Web stats for this site demonstrate, all types will come across these words, which will no doubt be both condemned and hopefully appreciated.

Read moreRand Paul: Yet Another Soulless Zionist Groveling For The Rothschild’s Approval

Jesse Benton may have mitigated harm to U.S. Sen. Mitch McConnell’s campaign when he resigned in reaction to a burgeoning bribery scandal on Friday, but it could send shock waves through the expected 2016 presidential campaign of Sen. Rand Paul, who is his uncle by marriage.

WASHINGTON (JTA) — U.S. Sen. Rand Paul said he will introduce legislation that would cut U.S. funding to the Palestinian Authority unless its government recognized Israel as a Jewish state.

Paul (R-Ky.), a likely contender for the Republican presidential nod in 2016, said the law was needed because of the interim governance agreement last week between Hamas and the Palestinian Authority.