THE MAN charged with succeeding Matteo Renzi as Italian Prime Minister has previously suggested Britain may not leave the EU despite the Brexit vote.

Paolo Gentiloni, a Renzi loyalist who served as Foreign Minister, has been asked to form a government by Italian President Sergio Mattarella.Mr Renzi stood down after losing a referendum on constitutional reform last week.

Mr Gentiloni, 62, takes over with Italy facing a banking crisis and a rise in anti-establishment and eurosceptic parties.

Speaking back in July, Mr Gentiloni suggested he would be delighted if Brexit was ignored and suggested the UK Government would be permitted to defy the will of the British people.

He told BBC HARDtalk the UK still had time to change its mind.

The 2016 Plenary Assembly of the Trilateral Commission took place in Rome from 15 to 17 April. ISPI provided scientific coordination of this conference which was attended by 280 businesspersons, politicians and journalists from Europe, North America and Asia – including China and India – Russia, Turkey and Saudi Arabia. 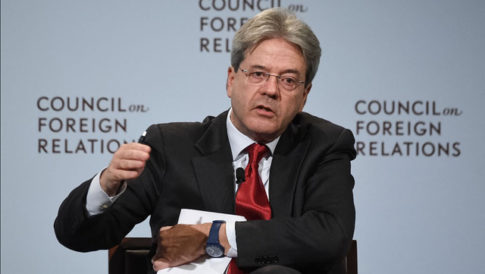 With the ECB snubbing Italy on Friday, and refusing to grant insolvent bank Monte Paschi more time to find a financial rescue, it was of paramount urgency for Italy to announce a replacement government that of outgoing prime minister Matteo Renzi, in order to mitigate concerns about the ongoing political chaos.  As a result, on Sunday, Italy’s President Sergio Mattarella asked departing Foreign Minister Paolo Gentiloni – a loyalist from Renzi’s Democratic Party – to form a new government, in the process hopefully bringing to a close a political crisis triggered by a ‘no vote’ in a referendum on constitutional reform last weekend.