For years the Ogallala Aquifer, the world’s largest underground body of fresh water, has irrigated thousands of square miles of American farmland. Now it is running dry 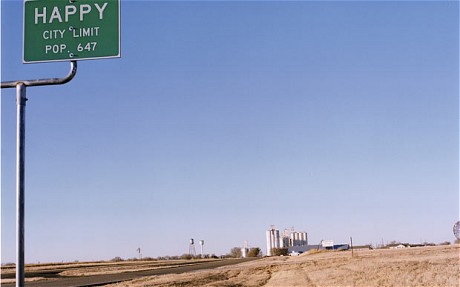 The town of Happy, Texas, sits on top of the rapidly depleting Ogallala Aquifer. Its population is dwindling by 10 per cent a year. Photo: Misty Keasler

There is not much to be happy about these days in Happy, Texas. Main Street is shuttered but for the Happy National Bank, slowly but inexorably disappearing into a High Plains wind that turns all to dust. The old Picture House, the cinema, has closed. Tumbleweed rolls into the still corners behind the grain elevators, soaring prairie cathedrals that spoke of prosperity before they were abandoned for lack of business.

Happy’s problem is that it has run out of water for its farms. Its population, dropping 10 per cent a year, is down to 595. The name, which brings a smile for miles around and plays in faded paint on the fronts of every shuttered business – Happy Grain Inc, Happy Game Room – has become irony tinged with bitterness. It goes back to the cowboy days of the 19th century. A cattle drive north through the Texas Panhandle to the rail heads beyond had been running out of water, steers dying on the hoof, when its cowboys stumbled on a watering hole. They named the spot Happy Draw, for the water. Now Happy is the harbinger of a potential Dust Bowl unseen in America since the Great Depression.

‘It was a booming town when I grew up,’ Judy Shipman, who manages the bank, says. ‘We had three restaurants, a grocery, a plumber, an electrician, a building contractor, a doctor. We had so much fun, growing up.’ Like all the townsfolk, she knows why the fun has gone. ‘It’s the decline in the water level,’ she says. ‘In the 1950s a lot of wells were drilled, and the water went down. Now you can’t farm the land.’